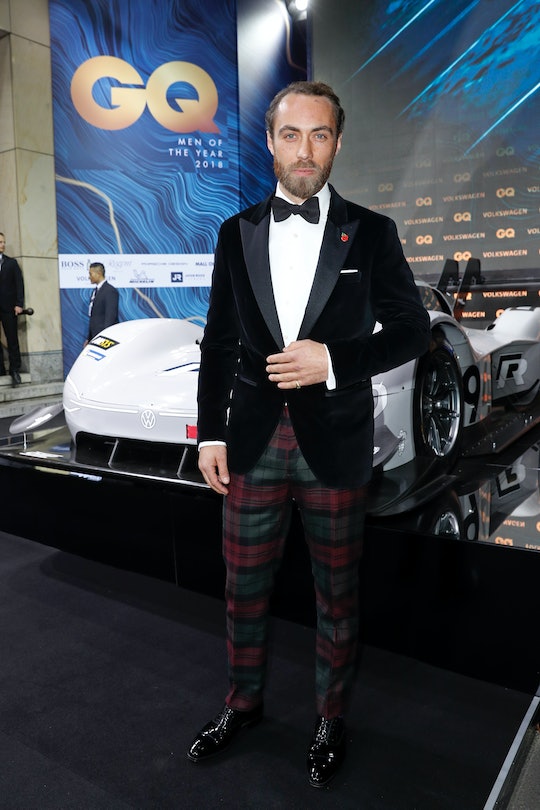 It is no small thing to open up about struggling with depression no matter who you are. It can make you feel vulnerable, exposed, worried about what other people might think. This is especially true, I think, if you happen to be someone who is living in the public eye... and someone who lives in Great Britain, a country notorious for their attitude of stiff upper lip and all that. I hate to generalize, but this is an issue that has even been addressed by the royal family in the past. And now that Kate Middleton's brother has opened up about his own mental health struggles, her own dedication to mental health awareness makes so much more sense.

James Middleton, Kate Middleton's brother and Prince William's brother-in-law, recently went public with his battle with depression. Middleton has maintained a relatively quite private life throughout his sister's intensely public marriage to the future King of England. In fact, his recent admission that he suffers from depression and his decision to make his Instagram feed public (almost unheard of in anyone associated with the royal family) is the most the public has heard from him in many years.

Which makes his openness about mental health all the more courageous.

James Middleton wrote a beautiful essay for The Daily Mail about his private battle, calling depression a "cancer of the mind" and talked about his darkest days before seeking treatment:

During the day I’d drag myself up and go to work, then just stare with glazed eyes at my computer screen, willing the hours to tick by so I could drive home again. Debilitating inertia gripped me. I couldn’t respond to the simplest message so I didn’t open my emails. I couldn’t communicate, even with those I loved best: my family and close friends.

Middleton went on to point out that he has a "blessed" life, with family who loves him, a thriving confectionery business called Boomf, friends and dogs. But none of these things were able to anesthetize him from depression, as he wrote in The Daily Mail:

I know I’m richly blessed and live a privileged life. But it did not make me immune to depression. It is tricky to describe the condition. It is not merely sadness. It is an illness, a cancer of the mind.

Middleton eventually packed up his dogs and left for the lake district of England, where solitary walks in nature helped to clear his mind and accept that he needed help. And while he said he did not open up to his sister Kate or her husband Prince William because it's difficult to talk to people who are "too close" to you, he spoke highly of their dedication to ending the stigma about mental health issues with their charity Heads Together (along with Prince Harry) in that same article:

They believe we can only tackle the stigma associated with mental illness if we have the courage to change the national conversation, to expel its negative associations.

Kate Middleton, Prince William, and Prince Harry have all dedicated themselves to charities that support mental health awareness, perhaps because they've all known people close to them who have struggled.

And perhaps because they want to make sure the people they love no longer struggle in silence.