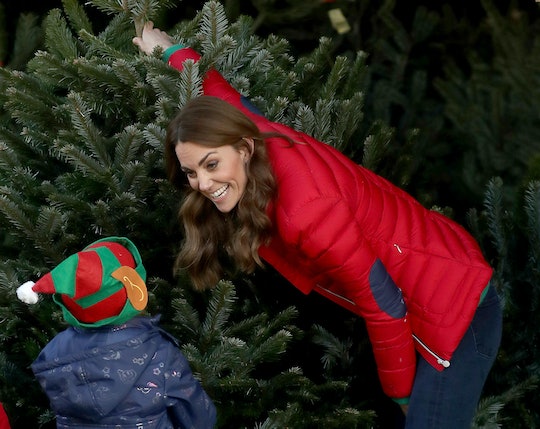 Kate Middleton might be a Christmas mom. Not that every parent has to identify especially with one holiday or another, but if the Duchess of Cambridge was going to choose a holiday I bet she'd pick Christmas. She seems to have a special affinity for it — from her red and green wardrobe choices around the holidays to her thoughtful gifts and even doing a little tree research. In fact, Kate Middleton has a preferred type of Christmas tree for her family and her choice tells me she takes the holiday pretty seriously.

The Duchess of Cambridge visited the Peterley Manor Farm in Prestwood outside London for an adorable royal outing on Wednesday helping school kids pick Christmas trees for their classrooms. Business owner Roger Brill told People that Middleton decided to do a little personal research for her own family tree while on official royal duty. Brill told the magazine that the mom of three said she had a particular tree in mind for the Cambridge family tree: "She was asking about the trees which drop their needles and those that don’t, and which ones smell nice! She said that they normally have the Nordmann Fir inside that doesn’t drop the needles."

So now we know. Kate Middleton likes a real tree that smells great and doesn't drop too many needles. Makes sense for a mom of three who probably does not want to deal with cleaning up all of those needles all the time. No plastic pink tree for this mom.

It should come as no surprise to royal watchers that Middleton goes the traditional route when it comes to her festive tree choices. In the past, the mom of 6-year-old Prince George, 4-year-old Princess Charlotte, and 1-year-old Prince Louis has spoken about her fun old-fashioned Christmas traditions. Like the time she gave her grandmother-in-law, also known as Queen Elizabeth II, a gift of homemade chutney for Christmas in 2016, as ELLE reported.

Or this year, when she and former Great British Bake Off host Mary Berry embodied the spirit of charity at Christmas by making Christmas dinner for charitable volunteers. I mean yes, this was filmed for an upcoming BBC special called A Berry Royal Christmas, but still. Cooking a feast for volunteers working over the holidays and highlighting worthy charities is what Christmas is all about, right?

Middleton seems to be all about creating memorable Christmas traditions with her family, even when those traditions don't blend well with the royal family. While the Queen opens presents on Christmas Eve with her family, Hello! Magazine previously reported that Middleton's children open their presents on Christmas morning. Which makes sense, right? They probably want to wake up and open their presents from Santa Claus under the twinkling lights on their sweet-smelling Christmas tree.