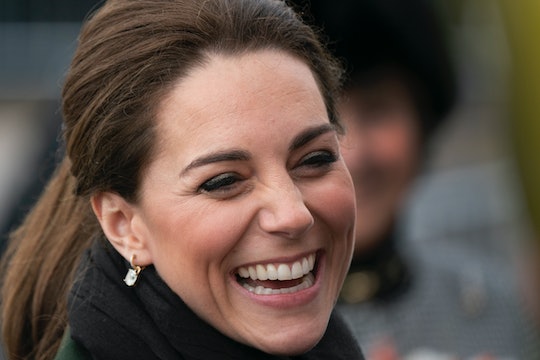 Prince William and Kate Middleton welcomed their third child — a son named Prince Louis — almost one year ago. And since then, time has has been flying by, if you ask me. And I think you'll agree when you hear Kate Middleton's newest update about Prince Louis, which proves that babies — especially royal babies — grow up so fast.

Prince Louis will celebrate his first birthday and turn 1 year old on April 23, according to TIME, which is a little more than one month away. It really feels like just yesterday when Middleton stepped out of the Lindo Wing, hours after she gave birth, with her little one in her arms. But Middleton's newest update about her youngest son will make you wonder where the heck time has gone. Really.

During an official royal appearance on Tuesday, Middleton gave a major milestone update about her little one. According to People, during her visit to the Henry Fawcette Children's Centre, Middleton told fellow moms there that her son is trying to be an independent little guy and is already pulling himself up on his own and walking (with some assistance).

"Louis just wants to pull himself up all the time," Middleton reportedly said, according to Hello! Magazine. "He has got these little walkers and is bombing around in them."

And it seems as if the smallest prince is even becoming a little bit too much for Middleton to handle, as one of the moms in attendance recalled Middleton revealing. "Apparently her son is cruising and she said she was running after him all the time," the mom said, according to Hello! Magazine.

Just three months ago, in January, Middleton revealed that Prince Louis was mobile and didn't have plans to slow down any time soon, according to Cosmopolitan. "Louis is a fast crawler," she said at the time.

From every update Middleton has given about her son, it seems as if he is a keen observer and eager to start playing with his older siblings, 5-year-old Prince George and 3-year-old Princess Charlotte. In fact, this past November, Middleton revealed that Prince Louis was already practicing his royal wave and "getting to be a big boy," according to Harper's Bazaar. And in January, Prince William said that their little one was already teething. Oh my goodness.

But it's very likely that royal watchers will be seeing another picture of Prince Louis very soon. Each year, Prince William and Middleton release new photos of their children on their birthdays, according to The Telegraph, which means a new photo will be released next month for Prince Louis' birthday.

Although updates about Prince Louis aren't as frequent as royal watchers would like, they're definitely exciting! I bet little Louis will be walking the next time we hear from his royal parents.