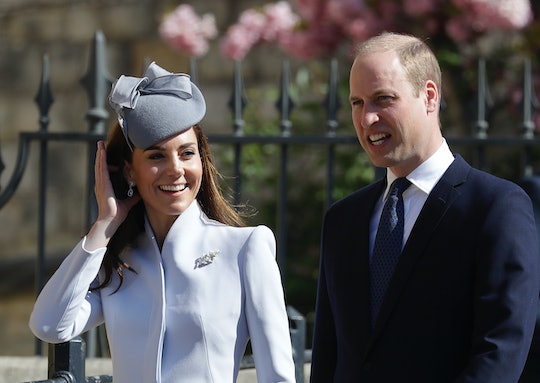 After months of waiting, the world is celebrating the arrival of the newest addition to the royal family. And no one seems happier than the couple that is otherwise usually on the receiving end of congratulatory wishes and newborn celebrations. Indeed, Kate Middleton’s reaction to Meghan Markle giving birth this morning is making royal watchers across the globe “awww” at how things come full circle.

The Duke and Duchess of Cambridge, aka Kate Middleton and her husband Prince William, along with other royal members of the family, released a statement with well wishes for Prince Harry and Meghan Markle. Prince William and Kate Middleton, who have in the past usually been on the receiving end of such congratulatory news after the birth of their own three additions, said they were “delighted with the news” of the new baby boy who was born just this morning, as Cosmopolitan reported.

“The Queen, The Duke of Edinburgh, The Prince of Wales, The Duchess of Cornwall, The Duke and Duchess of Cambridge, Lady Jane Fellowes, Lady Sarah McCorquodale and Earl Spencer have been informed and are delighted with the news,” the statement released from the royal family said. “The Duchess’s mother, Doria Ragland, who is overjoyed by the arrival of her first grandchild, is with Their Royal Highnesses at Frogmore Cottage. Her Royal Highness and the baby are both doing well.”

The world welcomed the royal newborn early Monday morning at 5:26 a.m. UK time, according to an announcement made by the royal family. Prince Harry and Meghan Markle's baby boy was reportedly safely delivered at 7 pounds and 3 ounces.

Upon the birth of Will and Kate's third child Prince Louis just this past year, the couple received congratulations from Queen Elizabeth, who was reportedly "delighted" about her newest great grandchild at the time, according to Town & Country Magazine.

Prince Charles, son of Queen Elizabeth and grandfather to Prince Louis, congratulated the couple as well with his added humor. "We are both so pleased at the news," the Clarence House announced at the time. "It is a great joy to have another grandchild, the only trouble is I don’t know how I am going to keep up with them.”

Now, Meghan Markle and Prince Harry are receiving congratulations from famous faces around world as the couple welcomes their first baby.

With the newest addition to the royal family, it seems like the entire world is celebrating. The name of the baby boy and the cause for all the celebration, however, remains to be announced.