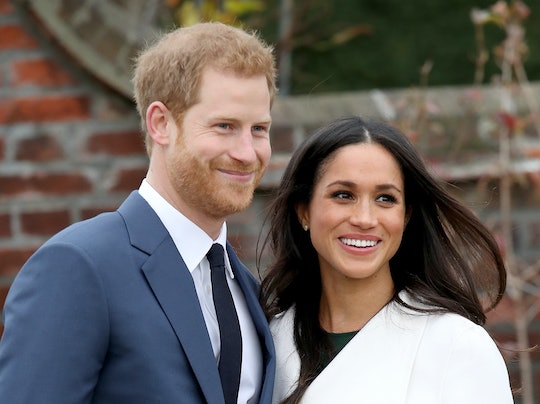 Hear ye, hear ye! It's the day we've all been waiting for — a new royal baby is in town! Today, royal officials announced on Instagram that Meghan Markle has given birth to her first child with her husband Prince Harry and it's a boy! As is tradition, not many details have been revealed just yet, but some have. However, simply the hearing news that the Duke and Duchess of Sussex's bundle of joy has arrived is cause for celebration.

More Like This
Meghan Markle & Prince Harry Donated Cute Beanies For Archie’s 2nd Birthday
“He Is Hysterical”: 12 Of Meghan & Harry’s Cutest Quotes About Archie
11-Year-Old Meghan Markle Would Be Proud Of Her New Partnership
Meghan Markle Reportedly Doesn't Want "A Big Baby Shower" As Her Due Date Nears

The statement added that Markle and the newest royal baby are "both healthy and well." It continued, "the couple thank members of the public for their shared excitement and support during this very special time in their lives. More details will be shared in the forthcoming days."

Markle's pregnancy was first announced in October 2018, just ahead of her and Prince Harry's royal tour in Australia, New Zealand, Tonga, and Fiji. At the time, Kensington Palace shared on Twitter, "Their Royal Highnesses The Duke and Duchess of Sussex are very pleased to announce that The Duchess of Sussex is expecting a baby in the Spring of 2019."

As to be expected with a royal pregnancy, there was a lot of speculation and theories floating around about when Markle would ultimately give birth. Some placed bets that she'd deliver in February, but as it turned out, Kensington Palace's telling, but vague announcement was right on the money.

Following Markle's pregnancy journey has been thrilling for royal fans across the globe. Sweet photos of the duchess cradling her bump have graced our social media feeds over the past few months. And Prince Harry, himself, was even the photographer of one.

Back in November, Kensington Palace shared a photo of Markle standing in a forest of tall trees with her hands delicately placed under her growing bump, with a photo credit to Prince Harry.

Royals aren't known to reveal many details about their pregnancies or birth plans, but Markle has spoken about her experience on a few occasions.

In January, for example, Markle reportedly told a well-wisher during a royal outing that she was six months along at the time and that "her pregnancy had gone so quickly," according to People. And shortly after her pregnancy was announced in October, according to Marie Claire, Markle reportedly told a royal fan in Sydney that she was having trouble sleeping. "Meghan told me that pregnancy was like having jet lag," the fan said, as Marie Claire reported.

As for Prince Harry, ahead of his first child's arrival, he had discussed becoming a father on a few occasions as well. For instance, in October, he told a fan that he hoped Markle was pregnant with a baby girl, according to TIME.

And in January, according to People, the Duke of Sussex delivered a speech that touched on the kind of future he hopes his child will be able to enjoy. "As someone who is about to become a father, I am acutely aware of our shared responsibility to make this world more resilient and its inhabitants more accountable for the next generation,” Prince Harry said at the time, People reported.

Weeks before Markle gave birth, the couple issued a rare statement about their birth plan, letting royal fans know they'd celebrate privately as a family before introducing their baby to the world. On April 11, according to The New York Times, the couple said in a statement:

Now that Prince Harry and Markle's royal baby is finally here, though, hopefully they're enjoying these precious moments with their new baby. And when they're ready, the world can't wait to meet Baby Sussex and hear all the adorable tidbits about life with their newborn.