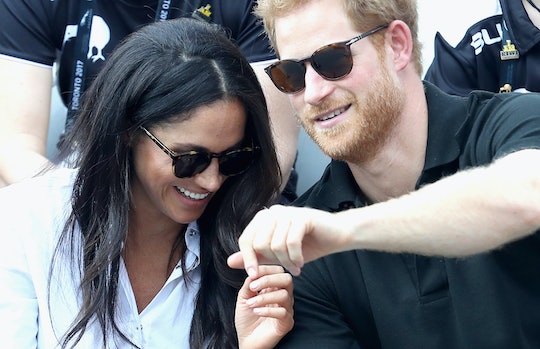 Ever since Meghan Markle and Prince Harry announced their pregnancy back in October 2018, speculation about the impending arrival of their royal baby has been at a fever pitch. Millions of people around the world have been latching on to any little tidbit of information they get and even, in some cases, just blatantly making stuff up as they go along. Perhaps because the couple themselves have been reticent about sharing details. Well I'm here to tell you that Meghan Markle and Prince Harry issued a royal baby official update after a long while, announcing a break in royal birth tradition. While what they had to say might not make everyone happy, let me just say I'm here for it.

Now that the couple are officially ensconced in their new home at Frogmore Cottage, they can finally do a little nesting and get ready for the arrival of their baby in the coming days. Markle has taken time away from royal engagements to begin her maternity leave, according to Harper's Bazaar, and clearly the one thing on both the Duke and Duchess of Sussex's minds is their new baby.

They are ready to be a family, but that doesn't mean they're prepared to welcome their baby in the traditional royal fashion. With a photo shoot on the steps of St. Mary's Hospital in London mere hours after giving birth, a la Kate Middleton and Prince William when they welcomed their three children.

On Thursday morning, as People reported, Buckingham Palace issued a rare statement from Markle and Prince Harry, explaining that they're veering away from royal tradition and that they have made a "personal" decision to keep the birth of their child private:

Some things are expected to remain the same; the palace will announce when Markle goes into labor to let them know the baby is about to be born, according to People, and then the couple are expected to share the news of the baby's arrival via their brand new Instagram page, @SussexRoyal.

The palace would not confirm where the birth is expected to happen, at the traditional St. Mary's Hospital in London like her sister-in-law or perhaps a hospital closer to their new home in Windsor like Frimley Park Hospital in Surrey, where Prince Harry's aunt the Countess of Wessex had her two children.

There will also be a photocall to journalists as there was in the hours after the Duke and Duchess of Cambridge's children were born, but this time around it will come "around two days" after the birth, as the Daily Mail's Rebecca English shared on Twitter.

TLDR: Markle won't be posing for photos outside the hospital right after she gives birth and the world won't see Baby Sussex until a few days later.

The reality is that Prince Harry and Meghan Markle are very different people from Kate Middleton and Prince William, not better or worse but different. Prince Harry has long rebelled against the traditions of the royal family, while Prince William has a much heavier weight on his shoulders as the future King of England. As the second son, Prince Harry doesn't have the same expectations for public announcements, despite the world's heavy interest in them.

And I, for one, am so happy that he and Meghan Markle are taking a moment to enjoy their new family before going to the public.