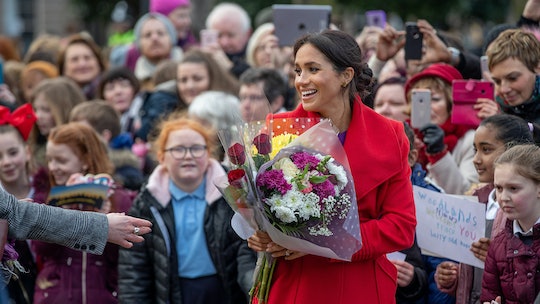 When Prince Harry and Meghan Markle, Duke and Duchess of Sussex announced they were expecting, they simply shared that the baby was due sometime in the spring. But recently, the Duchess dropped a much stronger hint. Meghan Markle has reportedly revealed her due date, and it's coming up sooner than some fans may have thought.

On Monday, Meghan and Prince Harry made a public appearance in Birkenhead, a town in Merseyside, England. As People reported, Meghan greeted well-wishers in the local Hamilton Square, where she told people in the crowd that her due date is in late April. “We asked her how her pregnancy was going and she said she was six months and she tapped her tummy,” a supporter named Carla Gandy who was at the meet-and-greet reportedly told People.

Kensington Palace announced that Harry and Meghan were expecting back on Oct. 15, simply noting that Meghan's due date was in the spring. "Their Royal Highnesses The Duke and Duchess of Sussex are very pleased to announce that The Duchess of Sussex is expecting a baby in the Spring of 2019," the account tweeted at the time. Given that spring spans from March 20 to June 21, late April isn't too far out.

Rumors that Meghan was due in April began to swirl way back in October, just days after she announced she was pregnant and due in the spring. On Oct. 20, Twitter fan account @DuchyOfSuccess shared a photo of Meghan's hand, in which three stacked rings are clearly visible, Cosmopolitan reported at the time. "I'm hoping Meghan’s stacked rings represent their birthstones and Baby Sussex is an April baby," @DuchyOfSuccess tweeted, adding that Meghan’s birthstone is a green peridot (August), Harry’s birthstone is a blue sapphire (September), and that the third ring, a diamond, possibly represented April, therefore theorizing that Baby Sussex was due in April.

And according to the Daily Mail, Meghan also told supporters at the event in Birkenhead on Monday that she and Harry want the baby's sex to be a surprise. HELLO! spoke with a 9-year-old girl named Kitty Dudley who got to meet the royal couple at the event. "I asked her if she was having a girl or a boy and she said she didn't know," the child told the magazine.

Around the same time, on Oct. 21, Prince Harry let slip what sex he hopes the baby is. Harry was visiting Australia for the Invictus Games, an annual sporting event that the prince founded for injured and sick servicemen and women, according to the foundation's website. At one point during his trip, supporters caught Prince Harry rushing down a street, and one yelled out to him: "Harry! I hope it's a girl!" as seen in a video shared on Instagram. "Sorry?" he responded. "I hope it's a girl!" the fan repeated. "So do I," Harry immediately replied.

Based on Meghan's alleged comments this week, the couple is excited to keep their baby's sex a secret. But should Harry find out before Meghan gets to the delivery room, I'm sure he'll be happy either way — unless it's a boy.