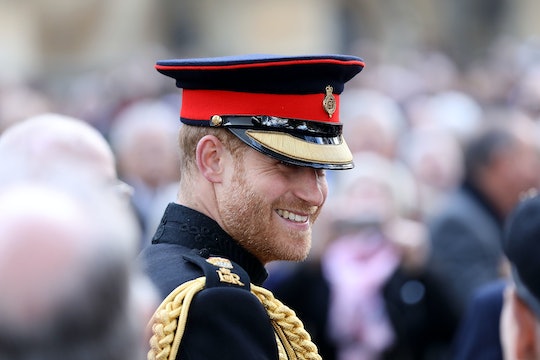 Prince Harry is ready to be a dad. I suspect he has been excited to be a dad for some years now if the love he shows every single child who ever crosses his path is any indication. But now the time is finally upon him, with his wife Meghan Markle due in just a few months. And the reality of becoming a dad for the first time is apparently top of mind. At a recent event Prince Harry talked about becoming a dad in a sweet speech, and he's clearly thinking with an eye towards the sort of future he wants for his child.

Prince Harry was on hand at Lancaster House in London for a roundtable discussion with young leaders to open the Youth Forum 2018 on Wednesday. He spoke to the young people present about the importance of energizing young people to be advocates, to feel supported, and to work together towards a common goal.

The Duke of Sussex noted that young people have the power to affect change, but he wants to make sure they feel supported, according to Harper's Bazaar. "However, it is our duty to make sure you have the tools and the support to rise above the red tape, the naysayers, the challenges you face, and to operate to the best of your ability — because when you come together, the whole world benefits," the dad-to-be said.

Of course, almost everything in Prince Harry's life must feel as though it circles back to the child he and Markle are expecting this spring. And when he spoke to the young leaders about overcoming impediments in life, he couldn't help but bring the speech around to his awareness of his responsibility as an expectant parent.

According to the Daily Mail, he said: "As someone who is about to become a father, I am acutely aware of our shared responsibility to make this world more resilient and its inhabitants more accountable for the next generation."

Both Prince Harry and Meghan Markle, who were married in May 2018, have kept the details of their little one to themselves. The exact due date has not been shared nor the sex of the baby. But every once in awhile, the veneer will crack and one or both of them will open up. Like when they were in Sydney, Australia when the official announcement came from Kensington Palace that they were expecting a baby. At the time, according to ELLE, Prince Harry said in a speech:

Thank you for the incredibly warm welcome and the chance to meet so many Aussies from all walks of life...we also genuinely couldn't think of a better place to announce the...upcoming baby, whether it be a boy or a girl. So thank you very, very much.

Prince Harry might be a member of the British royal family, but let's face it — he's also a first time dad with only weeks to go before the baby arrives. No matter who you are, I'm sure reality must be settling in. The reality that his life will change and that his world view will change.

As he said during the Youth Forum, he wants to make sure that this world is more "resilient" for the next generation. And I think that's a pretty admirable goal for a new dad.