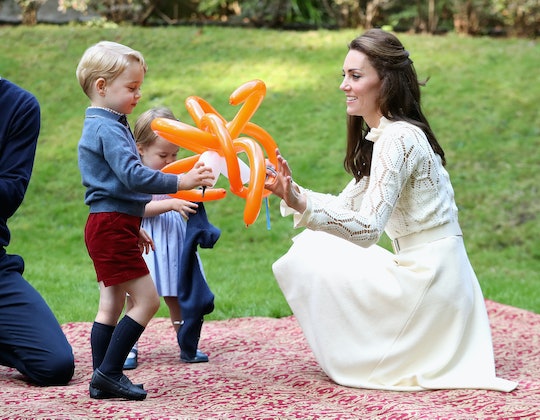 Kate Middleton Agrees That Kids Grow Up Way Too Fast

Oh boy is it tough watching your kids get bigger. In some ways it can be exciting, sure, to see them turn into the people they are going to become. But then you are also losing the tiny people they were; this is one part of parenting that nobody really told me about. The constant loss of these versions of your kids you are never going to see again. I think every mom feels it, even celebrities with bigger lives than mine. Take the Duchess of Cambridge, for instance, she might be a mom of three, but Kate Middleton's son Prince George is getting older and she's apparently feeling nostalgic about this relatable chapter of parenthood..

Middleton and her husband of eight years, Prince William, are parents to 6-year-old son Prince George, 4-year-old daughter Princess Charlotte, and 1-year-old baby boy Prince Louis. The pair are obviously incredibly busy people, what with Prince William being second in line for the British throne and both of them heavily involved in charity work through their royal foundation and such. But that doesn't mean Middleton doesn't take a moment every now and then to brood over how much her little ones are changing. Perhaps especially since their children have recently started a new school year, with Princess Charlotte joining her big brother Prince George at Thomas's Battersea in London just a few weeks ago.

You can't blame a mom for feeling a bit melancholy.

On Thursday, Middleton visited the Southwark Family Nurse Partnership, a service out of London that provides home visits for young first-time parents under the age of 24. While she was there, she met 22-year-old mom Chloe Koroma, who had benefitted from the program in the past and was on hand with her 4-year-old son Oliver. Considering how much Middleton loves being with children, it's no surprise that she headed straight over to Koroma and Oliver for a little chat. According to E! News, Koroma shared that the Duchess of Cambridge discussed her own son a bit.

"It was lovely meeting the Duchess. She asked how old Oliver is and what football shirt he was wearing," Koroma said of her chat with Middleton. "She said children grow up so quickly and she can't believe George is 6 already."

Prince George, who is third in line for the throne, did indeed turn 6 years old in July and his mother took some pretty adorable pictures of him to commemorate the occasion. Like this one of him laughing in the grass in the garden at Kensington Palace. Even I get a bit weepy looking at this picture and he's not my kid.

The Duchess of Cambridge has never made any secret that her children are her number one priority. Both she and the Duke of Cambridge make a point of taking their children to school and picking them up whenever possible, and they have both spoken about wanting them to have as normal a childhood as possible. But with all that focus on her children, it can be difficult to see them grow up and away from you.

Fortunately she has plenty of years left with her children while they're still little. Prince Louis is just 1 year old after all.