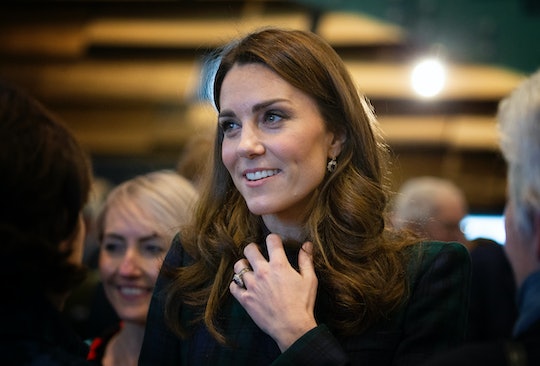 While it may seem like the littlest royal was born just yesterday, nine long months have passed since the Duchess of Cambridge stunned the world by greeting it postpartum in heels. Don't believe me? Well, Kate Middleton's update about Prince Louis shows just how grown up — and mobile — the royal baby has gotten.

Middleton was talking with a crowd on Tuesday outside the Victoria and Albert Museum in Dundee, Scotland when she opened up about how her youngest is getting along these days. According to People, which spoke to photographer Mark Stewart, who was there when Middleton greeted the crowd, the Duchess told a women that “Louis is a fast crawler.”

And while Kensington Palace has yet to release any video evidence of just how quickly Louis crawls, fans of the royal family have been treated to a recent photo that included the little prince. Last month, the official Kensington Palace Instagram page shared the photo below, writing, "The photograph, taken by Matt Porteous, shows The Duke and Duchess with their three children at Anmer Hall. This photograph features on Their Royal Highnesses’ Christmas card this year."

Sweet little Louis does look awfully grown up sitting on Middleton's lap and smiling straight into the camera.

According to Today's Parent, most babies meet the crawling milestone between six to eight months, meaning that 9-month-old Louis could have been practicing his particular brand of scooting for three months by now. It's no wonder he's mastered the skill! But if you're comparing your own little one to Louis and feeling concerned over his progress, fear not. Asha Nair, an Ottawa developmental pediatrician, told Today's Parent that just so long as they’re moving forward in some way, all is good. “Some kids don’t crawl. They ‘bum shuffle’ or roll and then go to walking.” she said.

But if you're still concerned and want to encourage your baby to get moving, Dr. Aishwarya Deenadayalu of Portland, Oregon’s Metropolitan Pediatrics told Fatherly that spending time with them on the floor often does the trick: "Give them the opportunity to try to get to stuff. You can entice them to get to the things they need to get to. It’s nothing fancy. Just having them on the ground is the most important thing."

Along with sharing updates on Prince Louis, Middleton also talked about her two older children while at the Victoria and Albert Museum. According to Entertainment Tonight, she told a group of children that “George and Charlotte would love to be learning outside the classroom. It’s still fun inside, but it’s much better outside."

Rather than make grand announcements or share details via social media, the royal family seems to prefer to update the publicly on their little ones directly. Meghan Markle — who is expecting a baby of her own with Prince Harry some time this spring — "announced" her due date to a passerby a couple of weeks ago, sharing that she is expecting the latest royal baby to make his or her arrival in April. She also added that she and Prince Harry don't know the sex of the baby yet.

Babies grow up so fast. One minute they're tiny, squishy newborns who can't hold their heads up without your help. The next, they're crawling faster than you could've ever imagined and you're chasing them all over the house — or the palace if you're Kate Middleton.