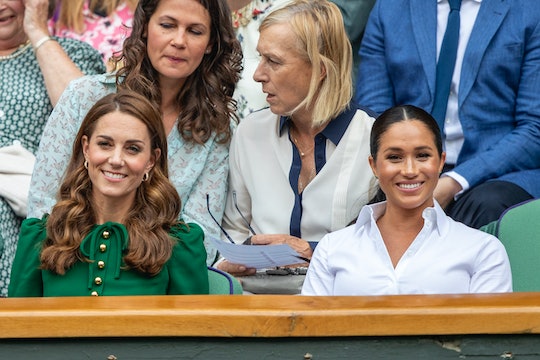 As 2019 draws to a close, Kate Middleton and Prince William are looking back on the past year, just like everyone else. The parents of three have a lot to look back on, of course. As senior members of the royal family, they've been busier than most. And as busy as they were, however, they're not just thinking back about their own special moments. In fact, Prince William and Middleton's "year in review" video they shared on Instagram included a sweet tribute to Meghan Markle.

The Duke and Duchess of Cambridge took a moment on Monday to share a sweet video clip of some of their special moments in 2019. Most of those moments came from their many, many royal duties, including their official visit to Northern Ireland in February, enjoying the Trooping The Colour from the balcony of Buckingham Palace in July with their children, and their royal tour of Pakistan. Naturally, snapshots of 6-year-old Prince George, 4-year-old Princess Charlotte, and 1-year-old Prince Louis were also included.

But the Cambridge family also took the time to acknowledge Prince William's brother's family in the clip. Prince Harry, his wife, Markle, and their baby boy Archie Harrison were featured in a very sweet way.

While other members of the royal family like Queen Elizabeth and Prince Charles were featured alongside either Middleton or Prince William in the post, the couple dedicated an entire portion to Markle and Prince Harry. First with the birth of their nephew Archie in May, which was clearly special to them, then with several pictures of the family at his christening. Finally, Middleton also included a short clip of herself at Wimbledon in July 2019 enjoying a laugh with her sister-in-law Markle.

Both families have struggled with a wealth of rumors floating around about them in 2019. Rumors of tension between brothers, difficulties between sisters-in-law, and a general feeling of ill will tearing them apart.

But this message at the close of the year really had nothing to do with any of that. While neither Prince William nor Middleton offered any explanation of their inclusion of Markle, Prince Harry, and baby Archie, the message felt pretty clear. At the end of the year, family is family. And no matter what anyone might think they know about them, there seems to be a lot of love there. What a way to end the decade.