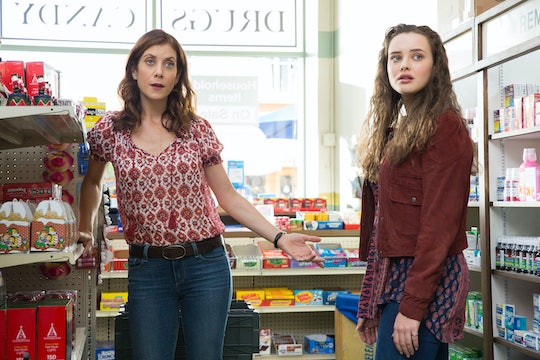 Kate Walsh Opens Up About Her '13 Reasons Why’ Role

Some shows are created purely for the audience's entertainment. But every so often, a series comes along with a purpose not only to entertain, but to educate. Netflix's highly anticipated 13 Reasons Why — which centers around a teenage girl's suicide and the reasons that led to her decision — seeks to do just that. Kate Walsh, who plays Hannah's mom on 13 Reasons Why, recently spoke to Romper about the importance of this story and how she prepared to tackle the role of a grieving parent.

After speaking with a psychiatrist at Stanford as well as parents who had lost their son to suicide, Walsh was determined to convey to viewers what exactly a parent ends up going through when something as devastating as this happens. Walsh states that she wants to "really try to do honor to parents who have had to go through this and accurately portray as much as possible in light of it still being a fictional world." Because while the story is fictionalized, suicide is certainly not. In fact, according to the American Foundation for Suicide Prevention, suicide is the tenth leading cause of death in the United States, which results in over 44,000 deaths each year.

However, this series (which is an adaptation of Jay Asher's young adult novel of the same name), doesn't just tackle the hard-hitting topic of teen suicide. It covers a vast array of issues, including bullying, depression, and sexual assault — all of which deserve the world's attention now more than ever. It's also a big part of what drew Walsh to the role in the first place. "What’s happening in our mad world right now... the culture needed a conversation about all of this," Walsh says. "We need to change the education. We need to change the dialogue."

This is especially prevalent in the world of the internet, where people think they can do or say whatever they want, whenever they want, without realizing the consequences that can stem from their actions. And if there's one very prominent lesson to be learned from 13 Reasons Why, it's that actions can have serious consequences, whether you mean them to or not. Hannah's cassette tapes are proof of that. In fact, that's why she creates them in the first place.

Every person who contributed to Hannah's decision to end her life gets their own tape, which they are all instructed to listen to or else risk the tapes getting released for all to hear. And, as those familiar with the book already know, there's plenty of blame to go around. But in bringing so much attention to these issues, 13 Reasons Why uses the fictional storyline as a platform to help prevent these real life experiences from happening.

"[The show is about] how to bridge that gap," Walsh explains. "How do you have educators and teachers and social workers and school counselors and coaches — how can we help them connect with students and then have the students have a different dialogue, [during] a time that [they] want to separate and get into cliques and gossip."

In the age of social media, teens face the possibility of humiliation and bullying on a much larger scale. Reputations can be ruined with the press of a button. Decisions you wish you could take back are now permanently saved in "the cloud." This is another facet the series explores. "To see with a text, with a picture, that in seconds your reputation can be destroyed or misinformation is spread. It’s devastating," Walsh says. "Any way that we can bring language and conversation around that, because I do feel like consciousness is everything. As soon as you have the information, then you know, then you have a rulebook, and then you have a way to discuss stuff and bring it out into the open."

That's not to say that this series is the solution to all teen problems. But because it addresses so many relevant issues that young adults face these days, and in this reigning era of the world wide web, it's certainly a good starting point. As Walsh points out: "If we don’t like something that’s happening in the world, we have to go out and talk about it and do something about it and not wait for others to tell us what to do. And I feel like... with social media... we have to police ourselves."

Because, in the time we live in now (when social media has almost become the law of the land), it's important to make sure that we don't let a tweet, a status, or a photo become the reason they make a life-altering decision.