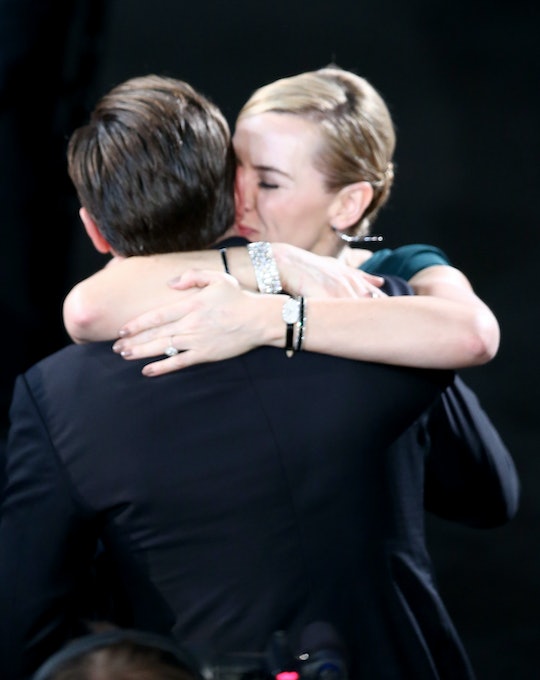 They became friends 18 years ago on the set of their first movie together. More importantly, they actually remained friends through fame and fortune, kids, divorce, and more. They've supported each other through highs and lows, both personally and professionally. And now that he has won his very first Academy Award, Kate Winslet's reaction to Leonardo DiCaprio winning the Oscar is pretty much going to be on all of our minds for the rest of, well, forever — because it was perfect.

Winslet couldn't have looked more proud. Sitting just a few rows away, she leapt out of her seat, listening to her friend intently, with tears in her eyes. It was a lovely moment.

Winslet was ecstatically proud of DiCaprio, even when she nay have been disappointed about her own evening. Because that's how it's done, right? Winslet herself has been nominated this year for her role as Steve Jobs' right hand woman Joanna Hoffman in Steve Jobs, but lost this year to Alicia Vikander. She won her first Best Actress Oscar back in 2009 for her role in The Reader after having been nominated herself 5 times before without a win. So she might understand a little about DiCaprio's situation. And she's made it clear she was there for her friend all the way.

Fans noticed. Some couldn't decide what they wanted to happen more: a win for DiCaprio or watching Winslet react to his win? And her reaction was exactly what we all hoped it would be.

Supporting each other appears to be the foundation for their (nearly) lifelong friendship. DiCaprio once told ET that "Kate is the best actress of her generation" and she in turn takes every opportunity to tell him she loves him.

The two met back in 1997 on the set of a little movie called Titanic where they played the quintessential star-crossed lovers Jack Dawson and Rose DeWitt Bukator (also as a little aside, Winslet helped make red hair hip again, so props). They went on to star in 2008's Revolutionary Road and cemented a lifelong friendship. So if you're ready to feel all the feels, here's a little montage of some of their most adorable moments together.

DiCaprio was a favorite for winning the Best Actor Oscar this evening... but let's get real here, he's been the favorite before, and never taken home the big award. He was first nominated back in 1994 for his role in What's Eating Gilbert Grape?, and again in 2005 for The Aviator and one more time in 2007 (Blood Diamond).

But it looks like tonight was finally his night. And even if he hadn't won? Leo and Kate are BFF's for real, and isn't that the most important part?