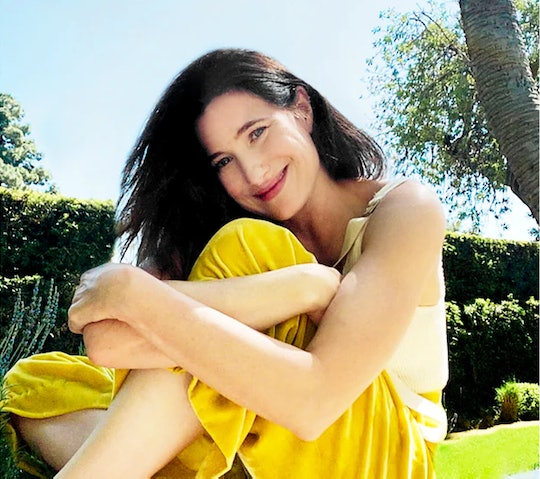 Imagine what it must feel like to be able to walk your kids through the early stages of your career. In a new interview with Bustle, Kathryn Hahn revealed she got to do just that and described watching one of her first film's, How To Lose A Guy In 10 Days, with her daughter as a "surreal" experience.

Hahn, of course, starred as Michelle Rubin in the 2003 rom-com alongside Kate Hudson and Matthew McConaughey. As she told Bustle, she recently sat down to watch it with her 11-year-old daughter Mae. Like most many families across the country, Hahn and her family, including her husband Ethan Sandler and 14-year-old son Leonard, are currently quarantining at home and enjoying movie nights together, so a viewing of How To Lose A Guy In 10 Days fit right in.

While speaking with Bustle, Hahn admitted that it was a bit of a "surreal" moment to watch her first movie with her daughter, who she apparently "loved it."

"I finally was able to show it to my daughter for the first time, who got a huge kick out of it. She loved it," she said. "It was very surreal to watch with her and to see that younger version of myself who hadn't quite owned herself as an actor or as a performer. … I was tap dancing as hard as I could, honey. Tap dancing for my life!"

Watching the movie with her daughter also had Hahn thinking about the person she was back then. A young actress struggling with self doubt. "I still just wish I could go back to that young actor and be like, 'Just breathe... You deserve to be here. You don't have to make jokes all of the time. You don't have to minimize yourself,'" she told Bustle.

In the years since How To Lose A Guy In 10 Days was released, Hahn's career has evolved. She has gone on to appear in varied movies like Bad Moms, Our Idiot Brother, and This Is Where I Leave You, as well as starring as an empty nester mom struggling with her identity on HBO's Mrs. Fletcher. Her life has changed immeasurably since her role in How To Lose A Guy In 10 Days, as has her personal life. She became a mom and, as she told NPR in October 2019, her role as a parent changed her career for the better. "I'm just so buoyed and galvanized that the juiciest part of [my career] has been post-kids. ... I never anticipated that. So that's terribly exciting," she told NPR.

It is such a special thing for Hahn to be able to share the evolution of her career with her daughter. To show her evidence of a young woman "tap-dancing" her way through her first movie right. And then prove to her that motherhood certainly does not spell the end of creativity. Rather, it can enhance it.