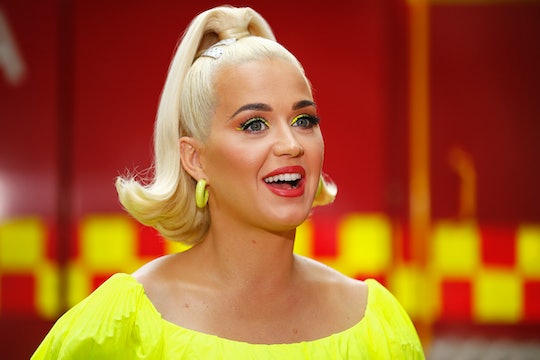 Between her famously bright wardrobe and fantastical music videos from over the years, it shouldn't come as a surprise to anyone that Katy Perry's nursery for her baby girl is no ordinary baby nursery. In fact, as she revealed recently, it's full of trendy decor and the pop star is already fully stocked with colorful and fun dresses for her daughter. Honestly, the tiny Eggo dress is perhaps the best detail of all.

Over the weekend, Perry, who is expecting her first child with fiancé Orlando Bloom, held a Zoom call with fans and showed off her little one's nursery. Of course, her daughter's room is bright pink with gold geometric shaped lights on the wall. Between the white crib with a simple mobile, a glider, and a changing table to "change the diapies," Perry's nursery furniture certainly gives off a minimalist vibe that lets the room's other features really pop.

In fact, the decorations are perhaps the most unique part about the nursery. For starters, there is a wall of little outfits on display (who needs a closet?) and a wall of books for Perry to read to her daughter. Perry also showed off a few outfits, including a super adorable onesie with Bloom's face all over it and a dress with Eggo waffles on it. Perry is known for wearing some wild and wonderful outfits herself, so it only makes sense that her daughter should be as stylish as her mom.

Perry also told fans that she has all of her diapers ready to go and will be rocking in her rocking chair "for the next forever."

As for when she will be rocking there with a baby in her arms? Perry told Entertainment Tonight on Aug. 14 that her baby and her new album will be due around the same time. "I'm delivering two babies!" she told the news outlet. "I have an album coming out on Aug. 28 called Smile and I have a daughter coming out whenever the hell she wants to!"

What's more, Perry told the Los Angeles Times that she has already started packing her hospital bag for the delivery, so her baby girl will likely be making her debut soon enough. And we'll just have to wait and see if she packed that amazing Orlando Bloom onesie for her daughter's first photos...