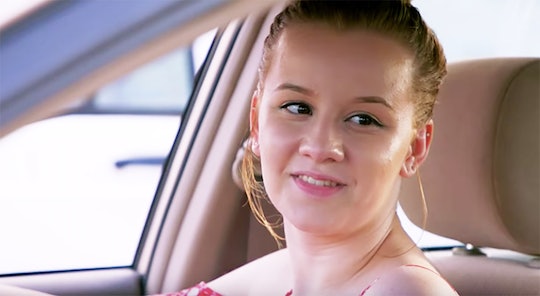 Congrats are in order for one Teen Mom: Young & Pregnant star and mom-of-one. On Monday, Kayla Sessler announced she's expecting her second child — with her new boyfriend, Luke Davis — in a sweet Instagram post. The mama-to-be also revealed her due date, so hopefully fans can prepare lots of sweet pregnancy updates along the way.

MTV viewers were first introduced to Kayla when she was pregnant with her first son, Izaiah Cole Alexander. The Illinois native later welcomed Izaiah into the world in September 2017 alongside her then boyfriend of three years, Stephan Alexander.

Sadly, Kayla's relationship with Stephan quickly fell apart after the birth of their son. But the young mom wasn't single for long because while registering for college courses, she met her current boyfriend, basketball player and college student Luke Davis.

Just six months after the two made their romance Instagram official in August 2018, they announced their happy baby news. "August 2019," Kayla captioned a shot of Izaiah wearing an adorable "Big Brother" shirt, while another pic showed the toddler holding up sonogram pictures. Talk about a cute moment.

As for Luke, he said about the news: "Zay gone be a big brother in August."

Following Kayla's sweet announcement, many fans took to the post's comments section to congratulate her.

Another person added: "Congrats! Mine are a little under 2 years apart and are best friends! Looks like he might have a baby brother."

"CONGRATUALATIONS! Babies are such a blessing," one commenter penned. "You seem to be a great mom... You got this."

It's probably safe to say Kayla is thrilled about the news given how comfortable and secure her relationship appears to be. Not only is Luke a father figure to Izaiah, but she recently referred to her boyfriend as the love of her life. "Happy 21st birthday to the loml," she captioned a cute video of the pair in January.

Many fans are happy that Kayla has found love again, especially since her relationship with Stephan was pretty tumultuous.

Kayla told RadarOnline that she filed a restraining order against Stephan in May 2018 due to an alleged domestic abuse incident. "My friend called the police on him. He ended up not getting arrested because police said they did not have enough evidence even though I had bruises on me," she told the news outlet.

As if the situation wasn't already bad enough, Stephan has allegedly distanced himself from Izaiah now that Luke is in the picture. "Stephan and I have no relationship. He doesn’t see Izaiah," she told RadarOnline. "When I got a new boyfriend he shied away a lot."

Stephan did not immediately respond to Romper’s request for comment.

As for whether fans will get to see Kayla's pregnancy play out on MTV, there's a good chance this will come to fruition because Young & Pregnant was reportedly renewed for a second season. “They were supposed to start filming in January, but they started early," a supposed source told The Ashley's Reality Roundup. "Most of the girls have been filming for Season 2 since mid-December.”

If the rumor isn't true, fans can stay in the loop via Kayla's Instagram account. I can't say for sure, but I have a feeling she'll share lots of sweet photos documenting her second pregnancy. Congrats, mama.