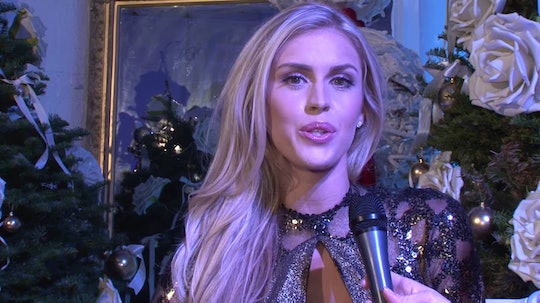 Many mothers battle postpartum depression after giving birth. And while PPD is a deeply personal experience for everyone, each time a mom publicly speaks about it, she helps fight the stigma that PPD must be kept private, hopefully inspiring other struggling mothers to get help. The latest mama of note to open up about PPD is model Kayla Rae Reid, 26, who welcomed a son named Caiden about 11 months ago with her husband, Olympic swimmer Ryan Lochte. In a video she shared to YouTube, Kayla Rae Reid talked about battling severe postpartum depression after Caiden's birth, and it's so important.

One in nine women experience symptoms of PPD, according to the Centers for Disease Control, and Reid's musings on the topic are sure to provide comfort to other moms who may be struggling.

"I know I've taken a while to talk about it, but I think I've just been kind of uncomfortable," Reid told the camera about her PPD:

It's serious, and it's something I've always wanted to express myself to people struggling in the past when I was going through it. I just remember how much hearing other people's stories gave me so much hope in myself, and to not give up, and it gave me perseverance to just continue waking up each day.

During the rest of the 22-minute video, Reid answered questions that she had previously asked fans to send in, about topics ranging from how she realized she had PPD, what symptoms she faced, why it's so hard to talk about, and all the things that have helped her get through it.

Reid first realized she had PPD when Caiden was about 3 months old. "It wasn't just mental. It was also physical," she explained to the camera. "I was dead inside." Her physical symptoms included anxiety, as well as feeling freezing cold, extremely exhausted, overwhelmed, and tired. "I would be like, 'Ugh I can't wait till nighttime so I can go back to bed and just lay there,'" she recalled. "I was on pause."

She would see friends and family going on vacation, and she couldn't even imagine herself having to go on a vacation. "One thing people don't know is that depression is physical. It's a physical thing," she said.

When asked how she overcame PPD, she explained that she still deals with some of its symptoms:

I don't think I've overcome it. I still have good days and bad days. I have way more good days, and I actually see life worth living, and I did not at all and that just blows my mind to say that. But I really didn't.

Still, she shared a bunch of things that helped her through PPD, the first of which was getting professional help as well as using medicated. She was anti-medication at first, but eventually she began a regimen of Zoloft, which she still currently takes. When she weaned herself off the medication, she felt her PPD symptoms coming back, so she began taking it again.

In addition to therapy and meds, Reid received weekly B12 shots and occasional immune boosters, because she had been suffering a loss of appetite. She also got a personal trainer to help motivate her to exercise, which made a huge difference. Finally, she joined a support group, which she is a big proponent of. She advises:

Just get it out, because if it's sitting inside you, it can really hurt you.

Something else that helped Reid was reading stories online of other mothers who had battled PPD. In fact, a night of binge-reading these stories is what made her first realize that PPD was what had been making her feel "like dog shit," as she put it.

Of course, not all mothers are able to afford things like personal trainers and vitamin shots, and Reid is certainly lucky and grateful that she could get herself the help she needed. Still, her advice is helpful to those who haven't been diagnosed or are afraid to talk about what they're feeling after having children. Moms are still conditioned to think they should be incredibly happy and full of sunshine after a child's birth, so Reid speaking out helps fight the stigma that PPD makes you a bad or ungrateful mom. Here are a few ways to tell if you have PPD, and if you think you do, make sure to reach out to a medical professional or a loved one for help.