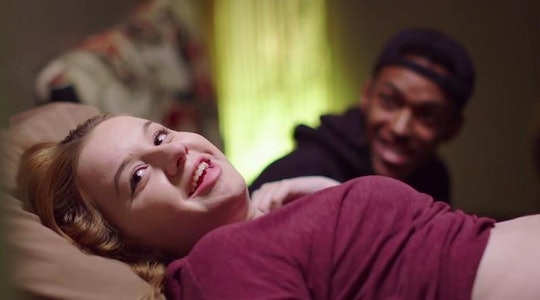 This 'Teen Mom: Young & Pregnant' Couple Can't Get It Together

The first season of MTV's new docu-series, Teen Mom: Young and Pregnant, has just completed airing new episodes on the network. As fans gear up for the reunion episode on Monday, June 25, they might find themselves wondering about the subjects who were featured on the series. One question in particular might be, are Kayla and Stephan still together? Unfortunately, the answer to that question is... well, to be honest, I don't quite know.

Teen Mom: Young and Pregnant took Kayla and Stephan's relationship for a pretty bumpy ride. Not only did they welcome a baby together, Izaiah, but they went through a lot of push and pull of the heart strings. One moment it seemed like everything was fine and there was hope for Stephan and Kayla to reunite once again, but a moment later things would come crashing down hard all around them. Hopefully Kayla and Stephan are able to provide fans of Teen Mom: Young and Pregnant with an update on their rollercoaster romance when the reunion special airs on Monday, June 25.

One thing we did see a lot of with Kayla and Stephan were their attempts to figure out how to co-parent a baby without being in a relationship. In one episode, Kayla made it very clear that she did not want her son's childhood to be like hers. According to the mother-to-be, Kayla grew up always have two separate birthday parties because of her parents being split up. If it were up to Kayla and only Kayla, she and Stephan would find a way to put their bygones behind them and focus solely on Izaiah's happiness. Unfortunately, as anyone who has been a teenager in love before knows, young love can sometimes be the most difficult to navigate.

While Kayla and Stephan's relationship is still undefined, it seems the young mother might actually be getting some of that co-parenting she hoped for. On May 28, Kayla posted an Instagram of herself, Stephan, and Izaiah at the aquarium together. Both Kayla and Stephan are smiling big for the photo, while little Izaiah is too distracted by what's swimming around underneath the water below him. How cute is that?

However, just a week or so later, Kayla's Instagram was lacking a very special post: a Father's Day shoutout to Stephan. We can safely assume she didn't miss the holiday because she posted a snap for her own father, but there was no post for Stephan. Now, to be fair, this doesn't necessarily mean anything. While what happens on social media these days is pretty telling of what's happening in someone's life, it's totally possible that Kayla decided to celebrate Stephan for Father's Day in her own, private way.

Again I have to say that I sincerely hope we get some answers about Kayla and Stephan's relationship when the Young and Pregnant reunion airs on MTV on Monday, June 25. Kayla's Instagram activity isn't helping us sleuth for details into their romance with all of it's inconsistencies. Plus, it's unclear exactly how long it's been since Teen Mom: Young & Pregnant was filmed for MTV. Think about all of the drama we've already missed between all of our new Teen Mom stars!

Additionally, there is no word yet on whether or not Teen Mom: Young and Pregnant will be getting a second season. I'm sure that fans would love nothing more, especially if it keeps them in the loop about all of their favorite Young and Pregnant stars. Maybe we'll get an official announcement after the reunion special? Fingers crossed — because that will mean more reunion specials, too.