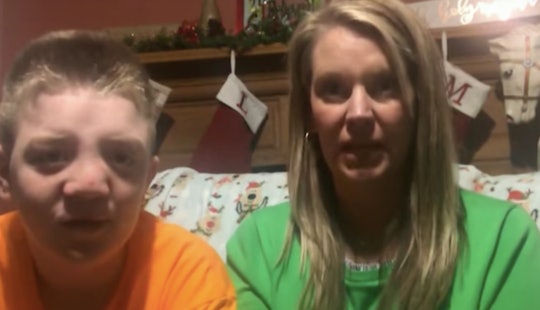 After taking the internet by storm this week with his viral anti-bullying video, 11-year-old Keaton Jones revealed he isn't going back to school just yet during an appearance on the British talk show This Morning, as Us Weekly reported. His mother, Kimberly Jones backed up his decision, saying, "He has maintained the entire time — even when the world wanted to come and eat lunch with him — that he didn’t want to go back to school. She added in the segment that, "after seeing how big [the video] got, it seemed like we should let it die down a bite before we make any decisions."

It makes sense if you think about it. According to NoBullying.com, kids who are bullied already don't want to go to school. Keaton filmed the video with his mom in the car after school one day and outlined the awful things bullies at his school have allegedly done to him, like pouring milk on him, getting pushed, and being called "ugly." And with the video drawing so much attention to himself and his family, it's possible that the alleged bullying could get worse.

After Keaton's video was shared by celebs and drew tons of support on social media, his mother garnered some controversy as well. Pictures of her and her family posing with Confederate flags circulated on the internet and she was accused of posting the video just to get money through a GoFundMe fundraiser. The family allegedly has been facing even more bullying in the face of increased media attention, according to People.

According to CNN, the family's social media accounts have been fielding comments from people saying that Keaton "deserved" to be bullied, that his family is racist, and any number of things. So, returning to the same school where he was bullied before might not be the best idea at this point. Which is really sad, since it means that despite all of the awareness around bullying, it's still really hard to keep kids safe from it school.

Although every state has anti-bullying laws, it's still hard for schools to use them to stop bullies. That's sort of the nature of the laws that allow schools to suspend kids or report violent behavior to the police. A 2010 memo written by Education Secretary Arne Duncan said that the anti-bullying laws were mainly "to send a message that all incidents of bullying must be addressed immediately and effectively, and such behavior will not be tolerated.”

It's a huge step to acknowledge that bullying is unacceptable and needs to be addressed, but both parents and schools are still trying to figuring out how to put an end to it.

According to stats from StopBullying.gov, it's apparently hard for schools to put an end to bullying. About 28 percent of kids in elementary and middle school report being bullied, and 20 percent of high schoolers do. The most common form of bullying is verbal abuse; the second is physical abuse; and the least common form is cyberbullying.

Even if most bullying happens in school, according to the federal stats, a lot of it happens off of school grounds. So kids really aren't entirely safe in their communities after school or in the classroom, which can probably make bullying feel like it's happening 24 hours a day for kids. It's no wonder that a 2016 study found that childhood bullying can lead to adult post-traumatic stress disorder.

Often, bullied kids miss school and then fall behind, only making the whole experience of getting on the school bus that much harder, according to the anti-bullying organization Absences Add Up.

The Tennesee Board of Education, where Keaton lives, requires school districts to annually inform students about how they can inform administrators of bullying, what bullying is, why kids should not bully, and a comprehensive guide for educators to investigate bullying allegations and how to inform parents.

Still, just like many adults don't report sexual assault and harassment for a host of reasons — the investigation process often being the most intimidating, according to RAINN — kids don't always report bullying or feel safe doing do. It's going to take a lot more than educational campaigns and anti-bullying assemblies to change the culture.

Much like a sexist culture persists in a company or on a college campus in part because of its reactions to reports from victims, ending bullying can only happen if schools' policies are implemented and enforced consistently and kids know that there are consequences to their actions, as well as kids knowing that bullying, much like not getting consent before sex, is wrong.

However, there are studies that show that zero-tolerance policies don't work for bullying, so strict discipline is not the only answer. It has to be a more well-rounded approach that comes from the community, the family, and the school, according to the Department of Education, which reports that bullying rates are going down in response to a comprehensive approach.

Still, some parents, like those of Rosalie Avila, the 13-year-old Californian who hanged herself earlier this month after reporting bullying to her school and parents, don't think schools do enough, according to NBC News.

Others, according to a blog post from Psychology Today after similar incidents occurred to two teens in 2016, feel like the entire burden shouldn't be on the school. Teachers and administrators can't be everywhere all the time for kids, especially when it comes to social media, which reportedly played a major role in the Avila case, according to CBS News.

While Keaton surely has learned a lot about the internet and being in the public eye this week, he's also been missing school and it doesn't seem like he's returning anytime soon. Hopefully, his parents and school can work something out, since a kid like Keaton has a right to get an education and not be too intimidated to walk into a classroom.

Sadly, there are kids all over the country who likely feel the same way, taking sick days. If even one bully has been scared straight by all this media attention, it might be a better start than any anti-bullying law in place.