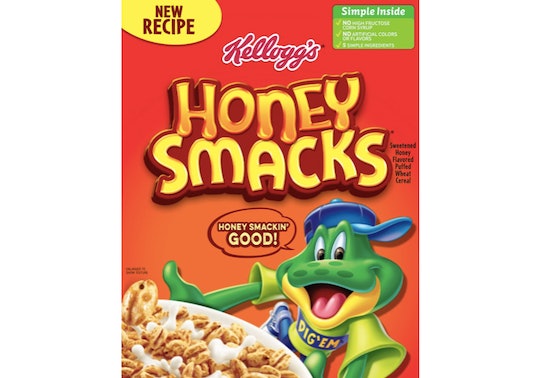 If you're a fan of Kellogg's Honey Smacks cereal, then you were probably left quite disappointed earlier this year when the U.S. Food and Drug Administration announced a wide-reaching recall of the product due to concerns of salmonella. Though the first recall, in June, applied only to certain products, by the end of the month, the Centers for Disease Control was advising consumers to get rid of all Honey Smacks products, just to be safe. But there's good news on the horizon: Kellogg's Honey Smacks cereal is returning to stores this November, though it won't exactly be the same cereal you're used to.

On Monday, Kellogg Co announced that Honey Smacks would soon be making its way back to grocery store shelves in the United States, one month after the CDC officially closed its investigation into the salmonella outbreak linked to the product, according to Reuters. But consumers who might be uneasy about the thought of purchasing the cereal — which caused 135 cases of salmonellosis in 36 states, according to the CDC — may be pleased to know that the company has since taken steps both to ensure the cereal's safety, as well as to improve upon the original formulation.

After the full recall issued in June, Kellogg's halted Honey Smacks production, and urged consumers to get rid of any Honey Smacks products they may have on hand. But although the company wasn't making the cereal, it was trying to figure out the best way to reintroduce it once it was given the all-clear. The result? According to ABC News 12, Kellogg's has "simplified the recipe," removing high-fructose corn syrup, along with some artificial flavors and colors, from the cereal. And according to Reuters, production of the cereal has also been moved to a Kellogg's facility, instead of the third-party facility that was previously in charge of production.

The new Honey Smacks cereal will start to be shipped in limited quantities, according to ABC News, which means it may be tricky to find for some time. But for anyone who was totally bummed by their Honey Smacks-free summer, they at least won't have to wait too much longer until they can pick up a box once again.

While the new boxes should be totally safe to consume, the CDC has emphasized that, even with the recall closed, and the product preparing to return to store shelves, it's still possible that older products that should have been recalled could still exist. In July, the CDC announced that people were still getting sick despite the recall a month prior, and that nobody, anywhere, should be eating Honey Smacks at all.

Given how much time has passed, it seems reasonable to think that the recalled Honey Smacks are likely fully gone by now. But before you assume the box of cereal in your pantry is safe to eat, you'll want to check the label: the new boxes will say "New Recipe" on the upper left corner, according to ABC News. (If it doesn't? Toss it, ASAP.)

While the Honey Smacks recall is now over, it still serves as a pretty good reminder for all consumers about salmonella contamination, and how they can better protect themselves. Though it's not always possible to avoid issues linked to factories or manufacturing, salmonella infections can also occur through improper food handling practices and hand washing at home, and that risk can be reduced.

According to the CDC, the best way to prevent salmonellosis is by ensuring that animal products like poultry, ground beef, and eggs are cooked thoroughly, and ensuring careful hand washing, especially when preparing meals, as well as after touching raw meat or poultry, coming into contact with any fecal matter, or handling reptiles, birds, or baby chicks. And cross-contamination (say, cutting raw meat, and then using the same knife or cutting board for something else without washing it first) should also be avoided.

If there's one thing that the Honey Smacks recall proved more than anything else, though it might just be that, actually, there are a lot of people who really enjoy eating Honey Smacks. And now, they'll be happy to know that they can do so soon enough.