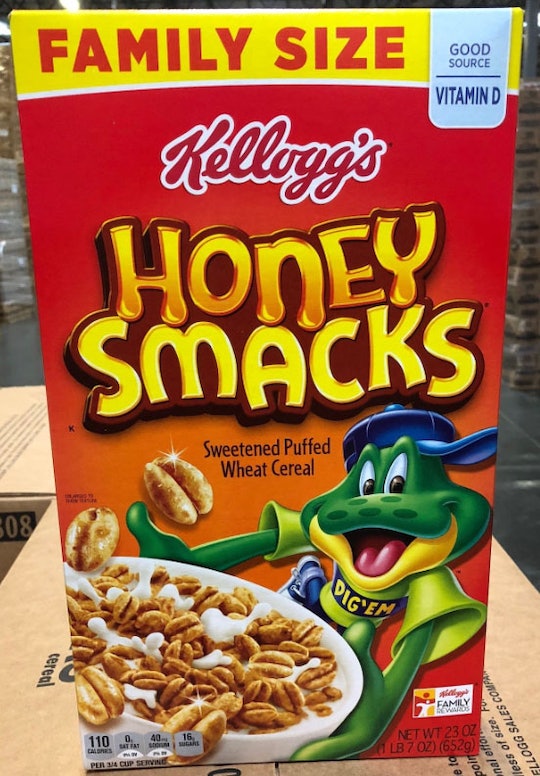 The CDC *Really* Wants You To Stop Eating This Cereal ASAP

In June, the Centers for Disease Control announced a recall of certain Kellogg's Honey Smacks cereal products due to concerns over salmonella contamination. Then, about a week later, that recall was widened to include all Honey Smacks products, regardless of package size or best buy date, after 73 people in 31 states were thought to have become ill. But on Thursday, the CDC announced that people are still getting sick from Kellogg's Honey Smacks even though it's been recalled, raising the number of cases of salmonellosis to 100 people in 33 states. So if you didn't happen to catch the warning the first time around, it's definitely time to go through your cupboards and throw out any Honey Smacks products you might have.

Thankfully, none of the Honey Smacks-linked illnesses have resulted in death, but 30 people have required hospitalization, according to CNN. And even among those who haven't, salmonellosis is certainly no picnic. Symptoms most often include diarrhea, fever, and abdominal cramps, and usually last between four to seven days. But more serious secondary complications, such as dehydration or sepsis, can occur in certain cases, and since Honey Smacks is marketed primarily towards children, who are at a higher risk of infection? The recall probably isn't something any parent will want to ignore.

Kellogg's did not immediately return Romper's request for comment on the CDC's most recent update, but in a statement on June 22, Kellogg's told Romper,

We issued the widest recall possible. We recalled all Honey Smacks in the market – including both available box sizes – with Best If Used By Date of June 14, 2018 through June 19, 2018. Any other Honey Smacks would be expired food and should not be consumed.

In other words, there is really no reason for anyone to be consuming Honey Smacks cereal at the moment, and any and all Honey Smacks products should be discarded, or returned to the store for a refund, even if you've already consumed it and experienced no symptoms. And that also includes any Honey Smacks cereal that may have been kept in a separate storage container that might not be marked — in this case, it's also important to both throw out the cereal itself, and "thoroughly wash the container with warm soapy water" before using it again, according to the CDC.

Have unmarked cereal in a container and aren't sure if it's Honey Smacks? Maybe consider throwing that out too, just to be safe. And that's not just a recommendation for those in the United States: according to the U.S. Food and Drug Administration, Kelloggs' voluntary recall also includes Honey Smacks sold in international markets, including Aruba, Curaçao, Saint Maarten, Bahamas, British Virgin Islands, Costa Rica, Guatemala, Haiti, Mexico, Panama, and Tahiti.

Even if you don't eat Honey Smacks though, the recall is a pretty good reminder for all consumers about how to better protect themselves from salmonella contamination that might occur at home. According to the CDC, proper hygiene and safe food handling practices are the best way to prevent salmonellosis. That means ensuring that animal products like poultry, ground beef, and eggs are cooked thoroughly, and avoiding the consumption of raw eggs or milk. Regular hand-washing is key, especially when preparing meals, as well as after touching raw meat or poultry, coming into contact with any fecal matter, or handling reptiles, birds, or baby chicks. And cross-contamination (say, cutting raw meat, and then using the same knife or cutting board for something else without washing it first) should also be avoided.

As the Honey Smacks recall shows, it's not always possible to avoid contaminated food products entirely, and Honey Smacks is certainly not the only salmonella linked recall to occur in recent months. But that's also why it's important to pay attention to any recalls that do occur, and to make sure that contaminated products are disposed of to eliminate any lingering risk.