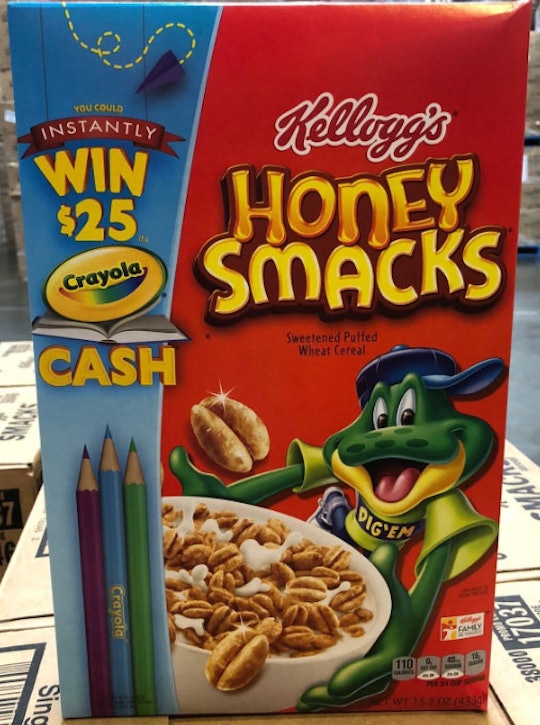 CDC: Get Rid Of *All* Of Your Kellogg’s Honey Smacks Cereal ASAP

After an initial June 14 recall of Kellogg's Honey Smacks recommended consumers throw away certain products based on package size and best buy dates, the Centers for Disease Control is now advising that you should actually get rid of *all* your Kellogg's Honey Smacks cereal, regardless of when it was purchased or produced, due to concerns about salmonella. The expanded recall comes after 73 people in 31 states are thought to have become ill from consuming the cereal, 24 of whom have had to be hospitalized, according to the CDC. But American customers aren't the only ones affected: Kelloggs' voluntary recall also includes Honey Smacks sold in international markets, including Aruba, Curaçao, Saint Maarten, Bahamas, British Virgin Islands, Costa Rica, Guatemala, Haiti, Mexico, Panama, and Tahiti.

Part of the concern about the Honey Snacks recall is that it's a cereal primarily marketed to children, and, according to the U.S. Food and Drug Administration, children are at a higher risk of getting salmonella poisoning (salmonellosis) than adults. Symptoms to look out for include diarrhea, fever, and abdominal cramps, and usually last between four to seven days, with most people being able to recover without medical treatment. But complications requiring prompt medical treatment can occur, like dehydration or even sepsis.

But while it might sound alarming that the recall has now been widened to include, well, basically any Honey Smacks products you might possibly have hanging out in your cupboard, a rep for Kellogg's told Romper that, the update isn't exactly a whole lot different than what was originally advised. In a statement, Kellogg's said:

We issued the widest recall possible. We recalled all Honey Smacks in the market – including both available box sizes – with Best If Used By Date of June 14, 2018 through June 19, 2018. Any other Honey Smacks would be expired food and should not be consumed.

In other words, if your Honey Smacks weren't already included in the original recall, they're probably old enough that you wouldn't want to eat them anyway. But that's probably not very reassuring to the people who have already been sick. On Wednesday Oklahoma woman Winnie Lemieux filed a lawsuit in Michigan court in reference to the Honey Smacks recall, claiming that she'd developed a salmonella infection at the end of May after eating the cereal, and that she was ultimately hospitalized, where she was allegedly diagnosed with infectious colitis and septicemia, according to The Detroit News. When asked about the suit, Kellogg's told Romper,

[While] we don’t comment on litigation, we take our commitment to quality and food safety very seriously. We are saddened to learn about any illness that may result from our Honey Smacks cereal, and will ensure this situation is handled in a responsible and sensitive manner.

So what's the overall takeaway message for consumers? At this point, you should throw away all of your Honey Smacks cereal or return it for a refund ASAP, even if you've already eaten it without experiencing any symptoms. And if you've been storing Honey Smacks anywhere other than in the original box, it's important that you "thoroughly wash the container with warm soapy water" before using it again, according to the CDC.

The Honey Smacks recall isn't the only salmonella concern as of late though: on June 14, the FDA issued an updated recall for pre-cut melon, after 60 people in five midwestern states became ill. On top of that, the FDA confirmed at the beginning of the month that a multi-state E. coli outbreak linked to romaine lettuce was responsible for five deaths, according to Food Safety.

When it comes to preventing salmonellosis, proper hygiene and safe food handling practices are by far your best bet. Specifically, the CDC recommends ensuring that animal products like poultry, ground beef, and eggs are cooked thoroughly, and discourages the consumption of raw eggs or milk. Regular hand-washing is key, especially when preparing meals, as well as after touching raw meat or poultry, coming into contact with any fecal matter, or handling reptiles, birds, or baby chicks. And cross-contamination (say, cutting raw meat, and then using the same knife or cutting board for something else without washing it first) should also be avoided.

The not-so-great news is that avoiding contaminated food products you've purchased at a restaurant or grocery store is much more difficult, but it's also why paying attention to FDA recalls is so important. So while it's never fun to throw away the food in your cupboard, it definitely sounds like the safest choice.