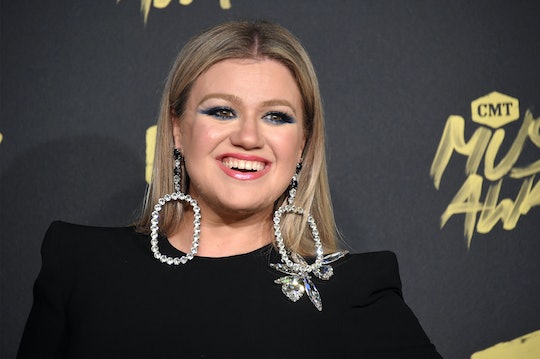 Kelly Clarkson might be a rich and famous singer with millions of fans, but don't go thinking she's forgotten what it's like to be regular folk. Especially now that she is reportedly getting focused on eating healthy. During a visit to the Today show as a guest co-host earlier this week, Clarkson admitted that eating healthy is "really expensive," and that she might not have been able to afford it when she was growing up. Can we all just appreciate her honesty for a hot minute, please?

Today host Hoda Kotb sat down with The Voice judge to discuss beauty trends and weight loss. Clarkson started off by getting real about Botox when Kotb asked her if she'd had "work done." The American Idol alum responded that she wished she could but she's "scared" of it for good reason; "It actually says 'toxin' in the name, y'all. So I'm just gonna be like a Shar-Pei. I'm just gonna own it." Then the two women got into talking about Clarkson's recent weight loss. Kotb noted that Clarkson looked great, and wondered what she might have changed. Spoiler alert: it's not exercise. The singer admitted that she doesn't "work out, and I should. Because of your heart and stuff. But I do wine though."

This is the kind of mom I need in my mom friend group.

Clarkson is a mother of four; she is the stepmother to 16-year-old Savannah Blackstock and 11-year-old Seth Blackstock from husband Brandon's previous marriage, and mom to 4-year-old daughter River Rose and 2-year-old son Remington. In other words, between her career and her marriage and her family, she's a busy gal. But she recently decided to get serious about trying to be healthier for medical reasons, despite being busy; Clarkson said on Today that she has an autoimmune disease and thyroid problems. So she turned to a book called The Plant Paradox, which she credits with essentially teaching her to "understand food and understand what we do to food," according to Scary Mommy.

The book encourages people to avoid foods like whole grains, dairy, nuts, and things like tomatoes that can cause inflammation, and Clarkson noted that trying to feed her family from a much more limited, organic, fresh menu is terribly expensive, according to Today:

Honestly, I’m going to be real with you. It’s really expensive to do. I wish the government would really back humanity on this because it’s really, really hard to find [ingredients]. I was poor growing up, there’s no way my family could have afforded this. It helps out so much with health. Like I said, my auto-immune disease is, like, gone. And I’m, like, 37 pounds lighter!

Unfortunately, she's not wrong. Fresh fruits and vegetables tend to be considerably more expensive than processed foods, according to a report by Vox, and if you add the word "organic" into the mix... I mean, forget about it.

It's hard enough to follow a healthier diet when you can't actually afford to buy all the food and have the proper ingredients to feed you and your family, but it becomes incredibly prohibitive if you're living on a budget.

As Clarkson said in an interview with Extra, "Weight loss wasn't the goal, it was an overall health approach."

Wouldn't it be great if every person could choose food that would make them healthier, regardless of their income?