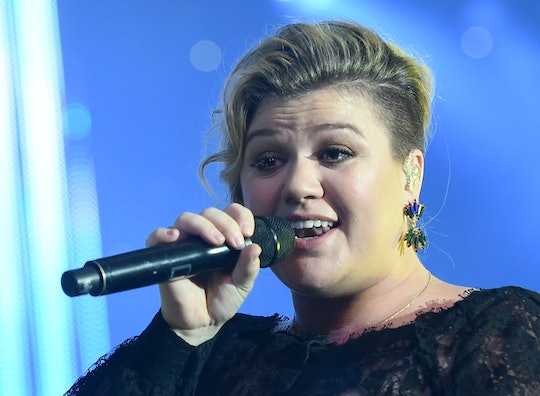 I've got to admit it: I like Kelly Clarkson. Sure, she "found fame" on a show that has churned out more performers than I can count (maybe that's just because I am bad at math, though) but she is more than just a pretty voice. Clarkson is a songwriter, a children's book author, a philanthropist, and a beautiful soul. (I don't know her personally, but Clarkson's southern charm leads me to believe she is authentic and sweet.) She is also a powerful woman and a wonderful mom. I mean, just one peek at Clarkson's Instagram account proves she is a great mom. A loving mom. A doting mom. But Clarkson is about to become a mama of two! So before celebrating the birth of "baby R," I thought we could celebrate some of Clarkson's best moments with her daughter, River. (And yes, there will be pics. I promise there will be pics!)

Clarkson gave birth to River Rose on June 12, 2014. River was Clarkson's first child and hubby Brandon Blackstock's third. In a 2015 interview with People, Clarkson revealed that she never thought she would be a mom, but that motherhood changed her life in the most amazing and "awesome way."

I love what I do, but I feel like I relied on my career a lot for my self-worth. And now I’m more than that. I’m a mother and a wife and have this whole other thing going on.

(Love it because I can totally relate.)

But back to the pics! Here are some of Kelly Clarkson's best "mom" Instagrams.

Clarkson posted this adorable pic with River hours before announcing her first children's book, River Rose and the Magical Lullaby. Because, while she may be the book's author, River is clearly its inspiration.

The smile...that face! This photo is just too cute for words.

Yes, River. There Is A Santa Claus... & He Is Terrifying

OK, truth be told, "Santa" looks sweet as pie, but then again, so does River! Besides, almost every parent has one of these hilarious photos in an old family album, stored on their cell phone, or shared on a Facebook page.

Clarkson keeps her kiddo entertained before a performance in Wheatland and the light in River's eyes really shows the love this pair shares.

This is my fave pic of River Rose. Why? I mean, the arms! Those cheeks! But also because of how sweet she looks, how comfortable she looks, and how happy she looks touring with mama.

The thing is wherever Clarkson and River go, they look lively, they look contented, and the look happy.