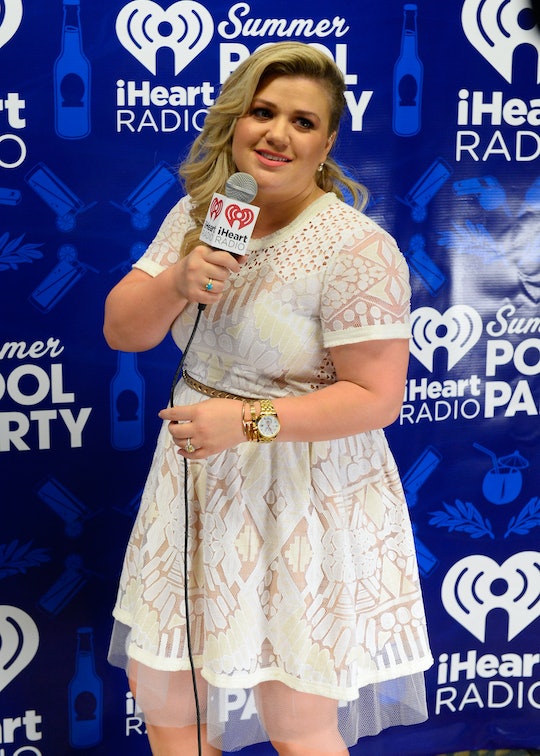 What Will Kelly Clarkson Name Her Son? She Dropped A Few Huge Clues

Listen, I'm invested in Kelly Clarkson. From her first teeny-bopper-with-a-billion-dollar-voice numbers on American Idol, her marriage, the birth of her first baby, River Rose, to the second baby on the way, I feel like I've watched her grow up. It's been more than a minute since she broke onto the scene, a fact I was reminded of when I realized Since You Been Gone debuted in 2005. (Let that sink in for a minute.) One of the many things I love about her was the choice of her daughter's name, River Rose. It's earthy and pretty and hippie and classic all at the same time. So with her son due practically any minute now, I'm wondering what Kelly Clarkson will name her son. And apparently, I'm not the only one, because there's more than one theory.

Clarkson announced the pregnancy in August during an LA tour stop with a predictable lack of pretentiousness fans have come love by practically blurting out, "I'm totally pregnant." And when I heard the news, I gave her a "go-girl" and silently cursed every tabloid that gave our Kelly a bunch of crap for gaining weight.

Then Clarkson, her husband Brandon Blackstock, the then 17-month-old baby River and Savannah and Seth — Brandon's kids and Clarkson's stepkids — put out this epic Christmas Card with a heavy Game of Thrones theme.

Once again, Clarkson was totally cute and everyone went bananas over how cute the card was, but some sharp-eyed Clarkson fans wondered if the "Winter is Coming" with the family name "Blackstock" printed underneath could be a clear signal about the baby's name. Was Clarkson planning to name her son Winter? Winter Blackstock is natural like River and would make total sense. I felt like I could close the file on that one and move onto other important celebrity matters.

But, just a couple of weeks ago, Kelly was on a radio show called Valentine in the Morning and said the baby's name begins with an "R." So not Winter, then?

So, I'm stumped and I guess we'll all just have to wait for the big baby reveal to find out the first name of River's little bro.

But, despite any confusion about her baby's name, there's one part of Clarkson's pregnancy that's super easy to predict: that she'll have to, once again, go through the exasperating, humiliating, and infuriating exercise of having to explain that pregnancy makes you gain weight. Here's what she said on the same show.

“I also have this thing called edema when I get pregnant where you blow up and it looks like you’ve been stung by one thousand bees and you’re highly allergic,” she told the radio hosts, practically apologizing for getting larger while growing a human being. “I’m so panicked about it. I look like I’m 400 pounds. I lost 30 pounds in nine days [after my last pregnancy] and it was all fluid. It’s so uncomfortable and I look horrendous.”

What a pile of crap. Here's a woman who is wildly successful, a loving wife and mother, someone who — while doing all of this — still found the time to come out and back up Kesha against Dr. Luke, and here she is feeling like she has to apologize for the audacity to swell while pregnant. It's hard out there for a woman, people. (Dr. Luke has denied all allegations, for the record.)

So, Kelly, I'll just go ahead and be the big sister to you I already feel like I am after all these years and set you straight. You don't look horrendous — you look beautiful. There is no need for you to panic about anything. You are gorgeous and strong. And if in the process of growing another person you need to go ahead and take up some more space, you just feel free to do that. Because your worth will never have anything to do with your size. So just stop feeling so bad about yourself and enjoy this crazy, baby-filled time in your life.

Also, I love River's Easter Bunny picture so much.

I — and all of Clarkson's other fans — are seriously looking forward to finding out what her son's mysterious "R" name will be.