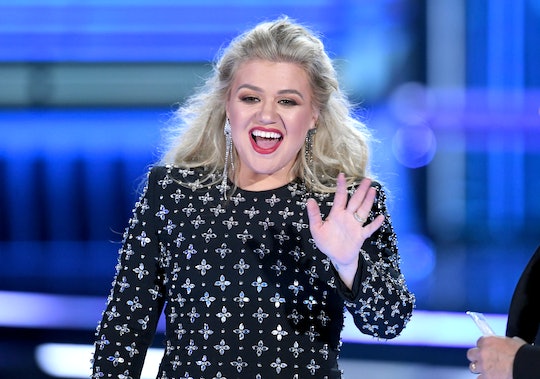 I loved taking my kids to school. We usually had about 15 minutes of enforced talking time every morning and every afternoon on the walk to and from school. That's a total of 30 minutes of precious stories I don't think I would have heard any other time. There were times when I had to miss the school run for work reasons and I felt ridiculous for resenting it. But Kelly Clarkson has me feeling a little vindicated right now for wanting to hold that time as sacrosanct. Why? Well Clarkson revealed that work schedule revolves around her kids' school run. And as she's about to start taping a daytime talk show, that's commitment, my friends.

Clarkson and her husband Brandon Blackstock are busy raising their blended family of four kids together at the moment; 17-year-old daughter Savannah and 14-year-old son Seth from Blackstock's previous marriage as well as 5-year-old daughter River Rose and 3-year-old son Remington. The Voice host has so many amazing things going on with her career right now, between her music and her recent role voicing a character in the Ugly Dolls movie as well as a new talk show on NBC called The Kelly Clarkson Show. While some of us might struggle to imagine how she keeps track of it all, the singer is laser-focused on one element of her life in particular — being there for her family.

In a recent interview with People, Clarkson opened up about prioritizing her kids on a daily basis by ensuring her show doesn't start taping until after they've been dropped off at school in the morning. "When we were doing the schedule for the show, I was like, ‘I have to drop my kids off at school,'" she told People. "And I’m always the one who puts them to bed. You just have to prioritize and juggle and make people know it’s an important thing. And don’t feel guilty about it."

I think the most important message from Clarkson here is to refuse to feel guilty about needing that time for your family. She's making the choice that feels right for her family, no matter what. That being said, Clarkson has previously admitted to struggling with mom guilt herself, according to Parents. For example, in an interview with Redbook in 2016, Clarkson said she has "a lot of mom guilt."

"There are days where I cry and I’m like, ‘I don’t know if I can handle all this!’ or get it all done," she told Rebook. "But at the end of the day, 99 percent of the time, it’s awesome and it’s worth it, and that’s what I say to myself."

Clarkson eventually figured out that she would include her kids in whatever way she wanted, even bringing them on her Meaning Of Life tour over the winter. "The babies come on tour. It's kind of hard. I'm not like, an absentee mom, so it's like I'm all in every time they're around," she said in January, according to Country Living. "So they're coming out on certain shows every once in a while. Because I figured out the last time I toured I was trying to be a supermom and a pop star at the same time and that was really hard."

This is the beautiful thing about Kelly Clarkson's habit of being really open about her parenting journey — you can see her learning as she goes along. Learning about how she wants to prioritize her family and career. And it seems like she's found a balance that works for her, guilt not included.