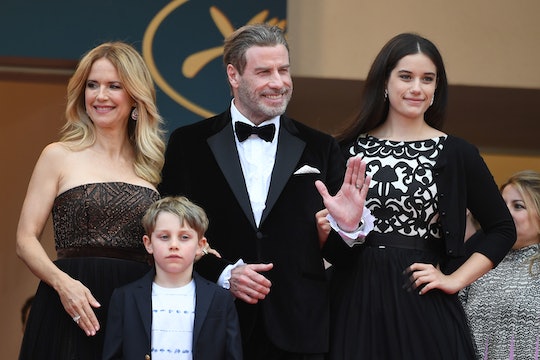 Kelly Preston's Daughter Pens Tribute After Mother's Death: "I Love You So Much Mama"

In an emotional Instagram post on Sunday, Kelly Preston's daughter Ella Travolta paid tribute to her mom. The actress died on Sunday after a two year battle with breast cancer, her husband of 29 years John Travolta confirmed on social media. Preston was just 57 years old and left behind two children, 20-year-old Ella and 9-year-old Benjamin. The couple's oldest child Jett died at age 16 in 2009.

A family representative told People on Sunday night that the actress had chosen to "keep her fight private." "She had been undergoing medical treatment for some time, supported by her closest family and friends," the rep told the magazine. "She was a bright, beautiful and loving soul who cared deeply about others and who brought life to everything she touched. Her family asks for your understanding of their need for privacy at this time."

Travolta also shared the sad news "with a very heavy heart" in an emotional Instagram post about the loss of his wife and mother of his children. "I will be taking some time to be there for my children who have lost their mother, so forgive me in advance if you don’t hear from us for a while," he wrote. "But please know that I will feel your outpouring of love in the weeks and months ahead as we heal."

Late Sunday night, Ella Travolta also penned her own tribute to her mother and it's a truly beautiful testament to the bond the two clearly shared. "I have never met anyone as courageous, strong, beautiful and loving as you," she began. "Anyone who is lucky enough to have known you or to have ever been in your presence will agree that you have a glow and a light that never ceases to shine and that makes anyone around you feel instantly happy."

She went on to write that she knows her mom made the world "a better place" and thanked her for always being there "no matter what."

Since news broke that Preston had died, several celebrities and fans have taken to social media to share their condolences with the family. Actor Russell Crowe tweeted about the first time he met Preston in 1992 and called her a "sweet, sparkly eyed gem," while Mariah Carey took to John Travolta's Instagram post to write, "Sending so much love to you and your family in this heartbreaking moment."

More Like This
Gabrielle Union Admits She May Be Becoming A Bit Of A Dance Mom With 3-Year-Old Kaavia
Prince Louis Is Asking His Parents Questions As He Tries To Understand Queen Elizabeth’s Death
Kylie Jenner Reveals That Her Mom Kris Basically Delivered Stormi
Nick Cannon Announced The Birth Of His 9th Child, A Daughter Named Onyx