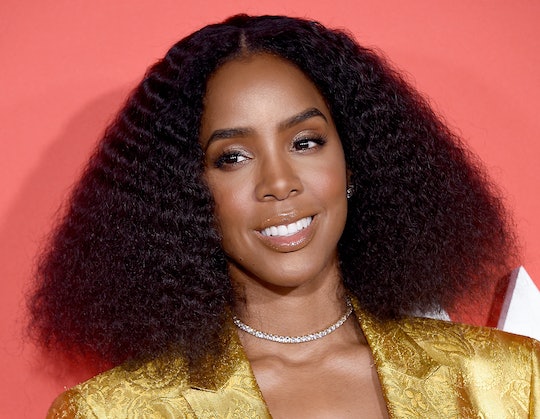 How Kelly Rowland Is Keeping Her Son, 4, Humble

“It makes me want to cry,” Kelly Rowland says while discussing mothers who are experiencing homelessness, an issue she revealed is close to her heart. Perhaps this is because she doesn't have to use her imagination to relate to this circumstance: “I actually went through an experience where my mom and I were homeless for a night,” she tells Romper. “I know what it feels like to not have a place to go. I know what it feels like to see your mom try to figure it out." Rowland and her mom were homeless for a night during her teens.

And it's in part why Kelly Rowland is teaching her son, Titan, about the importance of giving back: “I’m not raising an entitled kid.”

After spending some time with families and taking part in a mommy-and-me music class at Baby2Baby and Huggies’ 9th Annual playdate on Sept. 18 in Los Angeles, Rowland sat down with Romper to discuss her philanthropic work and how she intends to impart her values on Titan, who will turn 5 in November. As Rowland explains, she’s working as an ambassador for Baby2Baby, and she wants her son to understand that making a difference in the world requires action.

Although Rowland knows these concepts can be difficult for a little kid, she has developed a hands-on strategy to drive the lesson home. "When Titan gets a new toy, I say, ‘OK, well, which toy are you going to give up?’” she explains. “It’s the hardest thing right now. It’s the hardest thing. Especially for a 4-year-old to really comprehend.

"Like he’ll say, ‘I want that toy!’ Or he doesn’t want to share. So I say, ‘Aren’t you grateful you got this toy? Aren’t we really happy that we’re able to have three of them? You have three. There’s a kid who doesn’t have any.’”

During a recent trip to Canada, Rowland finally saw a shift in Titan’s thinking. “He sat and he thought about it. He said, ‘OK, the baby can have this one.’ It started with one. This has been a cycle, you know what I mean?”

Despite how tough life might get, Rowland is determined to raise a child who isn't “entitled” and “privileged," as she plainly describes, and to avoid spoiling him.

“For me, when I had my son, I was like, even though we are blessed, I can’t do that to him. That’s poisoning him. We can’t have a generation where kids have these moments where they feel like everything is theirs."

Los Angeles, a town where the children of the rich and famous are born into entitlement, presents obvious challenges for parents who want to raise earnest children. One of the ways Rowland tries to teach Titan about the value of hard work is with a reward chart.

"You work hard to get things or earn those things. That’s what I’m showing him now," she says. "When you do good behavior, you get a reward for it.”

After taking a beat to reflect on her efforts, she adds with a laugh, “Man, this parenting stuff is next level.” But if anyone can rise to the challenge of raising an empathetic kid, it's Rowland.