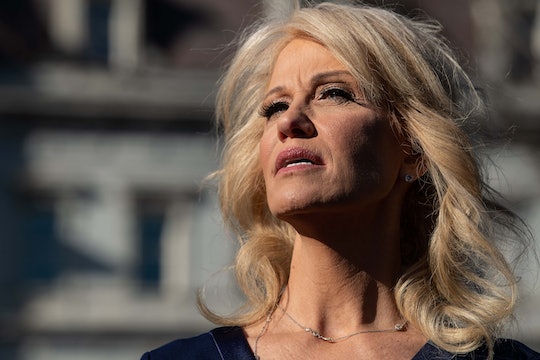 No, Kellyanne Conway Resigning To Be "More Mama" Doesn't Erase Her White House Past

The woman who led Donald Trump's 2016 campaign to victory announced that she's stepping down from her White House role as counselor to the president in order to provide her children with "less drama, more mama." But as fellow parents have pointed out, Kellyanne Conway resigning for her family's sake doesn't erase her past defense of Trump administration policies that tore other families apart.

"I will be transitioning from the White House at the end of this month," Conway said in a statement released Sunday, roughly one day after her 15-year-old daughter Claudia announced via social media that she was officially seeking emancipation from her parents. "This is completely my choice and my voice. In time, I will announce future plans. For now, and for my beloved children, it will be less drama, more mama."

While Conway cited the remote learning schedules of her four children and a need to provide them with a greater level of attention and vigilance as her reason for resigning, her family has repeatedly captured national headlines in recent months due to her daughter's outspoken criticism on social media. Most recently, 15-year-old Claudia declared on Twitter she was "officially pushing for emancipation" due to "years of childhood trauma and abuse." The teen has claimed Conway's job "ruined" her life and said it was "heartbreaking" that her mother continued to "go down that path after years of watching her children suffer."

But whether it's to facilitate remote learning or address more serious personal issues, many parents have said it's hard to have sympathy for the soon-to-be-former White House advisor given her past defense of Trump's policy of separating families at the border.

"You say Kellyanne Conway — I say kids in cages," activist author and mom of two Amy Siskind tweeted Sunday. "There should never ever never be redemption for this woman — with the atrocities and bigotry she enabled, the gaslighting and lies. No redemption."

Although Conway may be best known for coining the term "alternative facts," she was also a fierce defender of President Trump's decision to separate parents who crossed into the country illegally from their children. According to the Southern Poverty Law Center, the Trump administration first began quietly separating families under a pilot program in mid-2017. News of the practice didn't become public knowledge until the Department of Justice announced it had implemented a "zero tolerance" immigration policy in May 2018.

"[Under the policy,] undocumented asylum seekers were imprisoned, and any accompanying children under the age of 18 were handed over to the U.S. Department of Health and Human Services (HHS), which shipped them miles away from their parents and scattered them among 100 Office of Refugee Resettlement (ORR) shelters and other care arrangements across the country," the Southern Poverty Law Center has reported. "Hundreds of these children, including infants and toddlers, were under the age of 5."

As public outrage over the policy grew, Conway routinely defended the administration. In a June 2018 interview with CNN's Chris Cuomo, for example, she falsely framed the practice of separating families at the border as a necessary action to end child smuggling. "Nobody likes it," she said of the policy. "However, nobody also likes people coming and smuggling children. It is a huge enterprise. Why aren't you at the border screaming every day to stop this half a trillion-dollar enterprise in child smuggling?"

Conway's repeated defense of the immigration policy has left many unsympathetic to her current family affairs. "... She fully participated in the cruelty of this administration," one self-identified mom on Twitter wrote. "She should rot, in a cage, with a tin foil blanket on a cold floor of an abandoned Walmart."

Another mom tweeted that she didn't "feel bad" for Conway but instead felt bad "bad for her kids and all the kids she was complicit in separating from their own families."

Of course, parents aren't the only ones holding Conway accountable for her role in supporting Trump's immigration policy. "All the sympathy in the world for her child. None for Kellyanne Conway," Walter Shaub, former director of the U.S. Office of Government Ethics, tweeted. "If I'm going to worry about a parent, I'm going to worry about the ones whose children the administration Kellyanne Conway supported stole. This business that we have to be nice to Kellyanne is not for me."

Others, like singer Nancy Sinatra, have accused Conway of "deserting a sinking ship," in reference to Trump's 2020 presidential campaign.

While it's clear the Conways have personal matters to attend to, it seems that many are unlikely to forgive the White House advisor for her role in the Trump administration no matter the parenting struggles she may be going through.