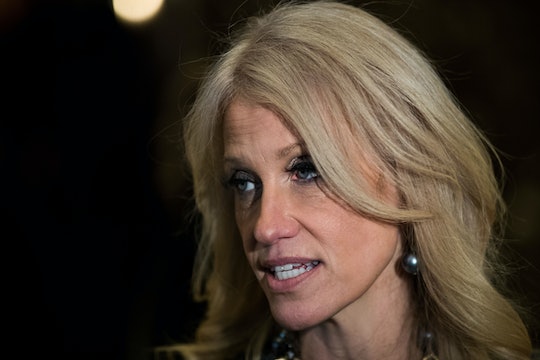 Conway Justifies Yet Another Trump Gaffe

Former Donald Trump campaign manager and newly appointed Counselor to the President-elect Kellyanne Conway appeared on CNN's New Day Monday morning to talk about Trump's response to Sunday night's Golden Globe awards, and in particular, actress Meryl Streep's speech obliterating Trump. New Day host Chris Cuomo didn't back down from the hard questions, and in a particularly cringe-worthy exchange, Kellyanne Conway said people shouldn't always "go by what's come out of [Trump's] mouth." Instead, Conway apparently believes the media should "look at what's in his heart." Wait... what? Representatives for Conway did not immediately return Romper's request for clarity or comment on what she said.

Let's backtrack for a minute on these mental gymnastics to provide some much-needed context. Conway's remark about looking into Trump's heart occurred during a discussion on New Day about Trump mocking a disabled reporter on the campaign trail in late 2015. On Sunday, while accepting the Cecil B. DeMille Lifetime Achievement Award at the Golden Globes, Meryl Streep took the opportunity to use her acceptance speech to rip into Trump — all without mentioning Trump by name once. Streep specifically called out the moment when Trump mocked the reporter in her speech, prompting the ever reactionary President-elect to tweet that he didn't mock the reporter "for the 100th time" — despite video footage that would appear to show otherwise.

Cuomo didn't hold back on grilling Conway about Trump's mocking gestures while she continued to deny that they were directly about the reporter. In a stumbling effort to recover, Conway then said America and the media should look into Trump's heart. Are you following all of this? Yeah, makes no sense to me, either.

There's a lot to dissect here in Conway's seemingly throwaway remark. First of all, this isn't the campaign trail anymore: Now that she's the counselor to the President-elect, her words carry far more gravity than mere campaign promises. There are no more throwaway statements. The person who is perhaps one of the closest and influential of Trump's inner White House circle just told America that it shouldn't take Trump at his word, but rather to "look into his heart."

Ah yes, let's just look into the hearts of some of our former presidents rather than what came out of their mouths: George W. Bush really and truly believed there were weapons of mass destruction in Iraq as a means to justify the war in Iraq. President Obama was totes serious about closing Gitmo even though eight years later, the legally vague detention center remains open. Trump is absolutely a champion of the disabled everywhere despite openly mocking a disabled reporter while running for president. I mean, how many Americans With Disabilities Act lawsuits has Trump faced, anyway?

Conway's comment on Monday is indicative of a much larger, more systemic tactic that dominated the Trump campaign and has already begun to color the incoming Trump administration: Gas lighting is Trump's M.O. And it's a dangerous precedent that he's set, a strategy that's now being used by his very own White House staff. By gas lighting America, Trump undermines the validity and credibility of the press by playing the "it never happened!" card over and over — despite often having the contrary on record in almost every instance.

This is more than just "words matter." This is the next President of the United States we're talking about now. If Trump expects to be taken seriously as president, then he needs to step up and stand behind his own record instead of deflecting, name-calling, and gas lighting his way out of uncomfortable and embarrassing situations. What will Trump do if he can't get Mexico to pay for his wall? Pretend he never said that? Oh wait. He's already done that.

I get that it's likely that Kellyanne Conway had the hardest job in the world managing Trump's campaign last year. According to POLITICO, Conway turned down an offer to become Press Secretary — and I don't blame her. But while she may not be Trump's official mouthpiece in the White House press room, Conway is still just as much a part of — and representative of — Trump's administration as any other White House staff member. And now Conway absurdly expects Americans to believe that we should trust the President-elect's heart over what he actually says? Oh, come the f*ck on already.