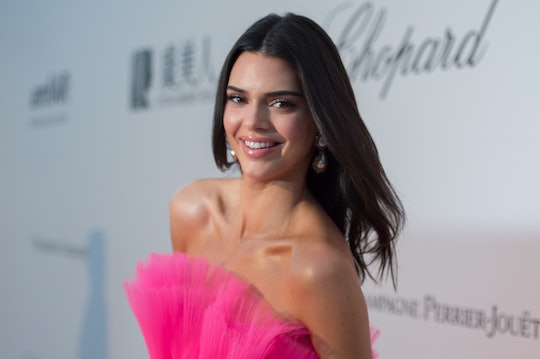 Not only are Keeping Up With The Kardashians fans totally losing it, but the KarJenners themselves also can't keep their cool after Kendall Jenner joked about starting a family. The proud auntie and 24-year-old model shared a few new and very adorable photos with her nephews on Instagram over the weekend and used the opportunity to take a poll on who would like the world to have more KarJenner babies. And, unsurprisingly, people are really here for it.

In the new set of photos, Jenner poses and plays with her nephews, Kim Kardashian's sons 6-month-old Psalm and 3-year-old Saint. In one photo, she holds baby Psalm and in another, she plays with Saint. And in the final photo of the set, Jenner smiles into a mirror with her arms wrapped around little Psalm, while her longtime friend and fellow model, Fai Khadra, takes the photo.

"Everyone in favor of Fai and I starting a family say 'I'," Jenner captioned the post.

While Jenner was likely just having fun teasing everyone with her new photos with her adorable nephews, she's previously said she's very happy with her aunt duties for the time being, telling Ellen DeGeneres in March 2018 that she doesn't want a kid of her own "for a while." That same year, she also confirmed to Vogue that she wants to wait to have kids when she is 28 or 29. And while she might get "baby fever" every once in a while, she told E! News in May that most days, children can be a little "too much" for her. "It's a lot to be able to play with them," she told E! News at the time. "I'll just be like 'go to your mom.'"

Whatever Kendall Jenner decides to do in the future, it's clear she'll have all the support a gal needs from her friends and family. They made that very, very clear.