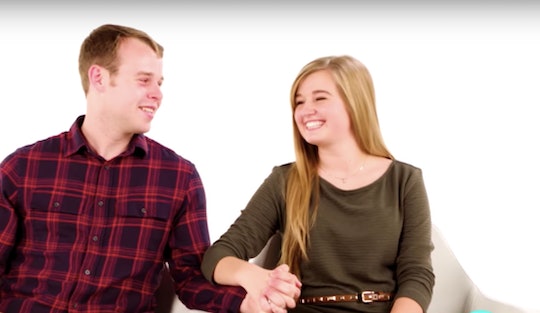 If you feel like there's always something to keep up with when it comes to the ever-expanding Duggar family, you're not wrong. From courtships, to weddings, to pregnancies, and plenty of babies, stars of the TLC reality show always have news to share. Like the fact that Joseph and Kendra Duggar will soon become parents to their first child. And in case you needed a reminder of where it all began, here's a look back at Kendra Duggar's pregnancy timeline, because it's already been a wild ride.

Now that Joy-Anna Duggar and her husband Austin Forsyth have already welcomed their son, on Feb. 23, 2018, Kendra and Jinger Duggar, who are both expecting right now, will be the next in the family to give birth. First up between the two? Kendra. The soon-to-be mom's pregnancy was announced just three months after her wedding to Joseph. "We are so excited to share with you that we are expecting the gift of a child ourselves!" the Counting On stars told Us Weekly in December. "Wow, it’s so exciting!!! We’ve both always loved children and seen them as a real blessing from God. It’s so surreal to think of being parents and having our own little one. We cannot wait to see this new baby!"

Since then, the happy couple has actually revealed quite a lot about their baby-to-be and how pregnancy has been treating Kendra so far.

September 2017: The Couple Ties The Knot

On Sept. 8, 2017, Kendra Caldwell became Kendra Duggar in an exciting ceremony at "First Baptist Church in Siloam Springs, Arkansas," according to People.

"It is an amazing feeling to be husband and wife," the 23-year-old expectant dad told the publication, adding:

It’s something that I’ve always dreamed of to have a wife and to raise a family in a way that honors the lord. We are to very excited to see what God has in the future for us.

Just three months after tying the knot, Kendra and Joseph revealed their exciting news. On Dec. 18, 2017, the couple announced that they were expecting their first child together, according to Us Weekly. They also released a sweet video of the expectant parents sharing the news with the fans themselves, sipping hot cocoa from matching mom and dad mugs.

February 2018: The Baby's Sex Is Revealed

Keeping with many of the modern pregnancy traditions, Joseph and Kendra had a gender reveal celebration, and announced that they were having a baby boy on the Duggar Family website. According to their statement, they wrote:

Wow! We are so happy to learn that our firstborn is a boy! Our minds are already racing toward all the future memories to be made with this little guy! Most of all, we are already asking God to bless him and help us grow him into a loving and faithful follower of Christ!

As can be seen in the photos, and confirmed by Us Weekly, the couple used "tannerite mixed with blue-colored powder to reveal the gender of their child once the explosive detonated." In the video update, both parents explained that they were excited to be having a boy, with Kendra adding she was looking forward to dressing him up in cute outfits.

Kendra Also Opened Up About Her Morning Sickness

Also in their gender reveal video, Kendra opened up about how she had been dealing with some morning sickness towards the beginning of her pregnancy. "During my pregnancy, I’ve had a lot of morning sickness. I think it’s slowly subsiding. [So] other than that it’s been good," she said in the video.

March 2018: The Due Date Is Announced

Given when their pregnancy announcement came — three months after their wedding — fans had already speculated that they were due sometime in June. So, it wasn't too surprising when the couple revealed to Us Weekly that they were in fact due on Father's Day 2018, which falls on Sunday, June 17 this year. Speaking to the magazine, Kendra said:

We would love to have more kids if the Lord blesses us. As many as He wants to give us, we'll be happy to take them.

Kendra also has plenty of cheerleaders in her corner to support her as she has her first child. She along with Joy-Anna and Jinger have gotten plenty of advice from the older Duggar daughters, Jessa and Jill, about what to expect with their pregnancies. "It's been a really unique experience in that we’re getting to share all of the different changes that our bodies are going through and can talk about them and encourage each other," she told Us Weekly. "It’s definitely been nice."

Considering that Joseph and Kendra are pretty unique in their absent social media presence, it's been a bit more challenging to keep up with them than a lot of their siblings. However, as The Inquisitr reported, it appears as though Kendra had a baby shower over Easter weekend. The shower was reportedly masquerade themed, and "Kendra’s father, Paul Caldwell, and her husband, Joseph Duggar, were at the baby shower," meaning that it wasn't a girls-only affair, according to The Inquisitr.

Looking back at Joseph and Kendra's pregnancy journey, it's clear that the two are totally ready and happy to be starting a family together. And with about two months to go, they'll officially be parents before you know it.