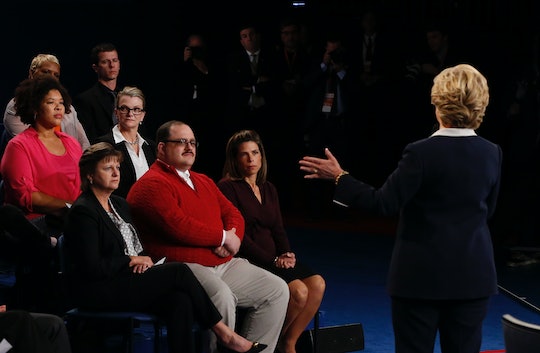 Everyone deserves their 15 minutes of fame and, Kenneth Bone; welcome to yours. At the second presidential debate in St. Louis on Sunday, various undecided voters were given the opportunity to ask the two presidential candidates questions and hope they got the answers they were looking for (or answers that made any sort of sense, in some cases). One such undecided voter, Kenneth Bone, became the clear winner of the debate on Sunday if the Kenneth Bone memes are any sort of gauge for such things.

Kenneth Bone went about the task of asking the candidates a pertinent question on energy, and most of us people watching from home were thinking, Isn't he simply wonderful? His kind face was at direct odds with his decently clever porn-star moniker, he was clearly prepared and excited to be there. His genuine niceness was a breath of fresh air in the midst of a knock-down, drag-out fight between Clinton and Trump, both of whom came out swinging. Both candidates struggled to stay on point with questions, with Trump especially deflecting at every turn with his safe word "ISIS," and pacing aggressively back and forth by Clinton. Allegations and threats were swirling about the stage... in short, we needed a hero, and we found one in Kenneth Bone.

I hope Kenneth Bone enjoys his moment of internet fame, because we are all enjoying the brief moment of sunshine in an otherwise dark night that he shared with us. Kenneth Bone, he of the disposable camera and joyful enthusiasm, won the debate, hands down. And we all thank him for it.