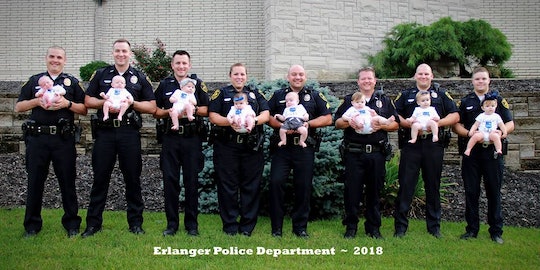 This Police Department Just Had A Major Baby Boom

If you're scratching your head trying to figure out if you've heard this story before, I assure you, you're not losing your mind. A group of Erlanger, Kentucky police officers welcomed eight babies in the past year, and their viral Facebook post featuring a group photo of the colleagues and their kids even references the fact that this isn't the first time that a whole boatload of first responders have all decided to expand their families at once. "Hey Glenpool Fire Department," the caption read, "I guess there's something in the water here in Erlanger KY too!" A series of cheeky hashtags noted that the EPD "beat" the Oklahoma firefighters, who had their own viral moment earlier this year thanks to a slightly smaller baby boom.

It's a pretty significant population boost for the small town of Erlanger, located 20 minutes south of Cincinnati, Ohio, as well as a bit of a staffing nightmare. "We are all like, 'Oh, I am having a kid,' then we are like, 'So am I.' 'So am I.' A couple months later, 'So am I,'" Officer Ryan Atchley told local NBC affiliate WLWT. "Then you start looking at it and say, '[The] schedule is going to be an issue.'" He's one of the seven new dads on the force, along with Officers Robert Yocum, Michael Clark, Kyle Thornberry, Justin Auton, EJ Dettmer and Josh Nezi. Atchley also acknowledged the comparatively tougher challenge for Officer Margaret Ernst. "She is not only having the kid, she is doing this job also."

But before someone trots out some #notallmen nonsense, let's give credit to Yocum, who seems to be a pretty equitable partner (and proud of it). "I average about three hours [of sleep] a night," he told WLWT. "I do all the wife's meals for the whole week, the kids, I do all of that. I make birthday cake, stuff like that. Even though I don't eat cakes." Bro, try making birthday cakes when you do eat them, but your kid wants the one flavor that you hate. I'd rather make something I categorically dislike than make something that's almost something I like. But still, good show.

An incredible one in five EPD officers welcomed a baby over the past year, Lieutenant Jon Sterling told Cincinnati's Fox 19. The four boys and four girls range in age from 6 to 11 months old. That does, indeed, beat the Glenpool firefighters, who boasted of their seven new babies in May, all born within a 15-month span. But next year, we can expect to see both the EPD and GFD get absolutely trounced in the simultaneous pregnancy showdown, because the intensive care unit at the the Banner Desert Medical Center in Mesa, Arizona has twice as many babies on the way.

You read that right; 16 ICU nurses at Banner are pregnant, and they're all due between September and February, according to CNN, the same tight span as the cops' babies. Nursing director Heather Francis said the hospital has been preparing for the inevitable staffing shortage for months, as each nurse will be taking 12 weeks of concurrent maternity leave. Their coworkers don't seem bitter, though; the hospital gave all the expectant mothers matching onesies, and the cafeteria even created a "pregnancy-friendly" salad bar, stocking pickles and olives at one nurse's request.

So why are all of these workplaces suddenly inundated with fruitful wombs? No, there isn't "something in the water," despite what hundreds of corny headlines keep insisting. That's not how babies are made. But according to a 2014 study published in American Sociological Review, "a friend's childbearing increases an individual's risk of becoming a parent," to which anyone with a large social network can probably attest. And a theory posted by Working Mother magazine might explain why co-workers may similarly influence each other. CNN is also experiencing a baby boom, and the network's parent company, Turner Broadcasting, consistently ranks among the magazine's annual list of best companies for family-friendly policies. It could be a coincidence, but it makes sense that people are more likely to breed when their employers are cool with it. Just something to think about.