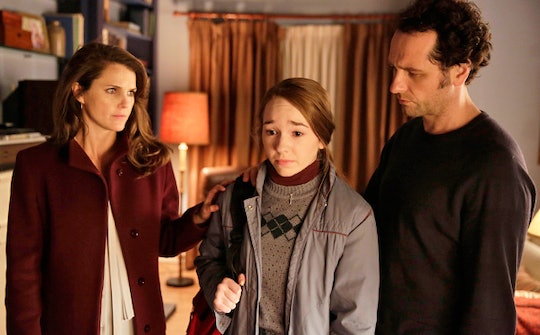 Keri Russell & The Kind Of Mom We Aren't Ready To See

For a long time, the struggle of work/life balance was a dominant theme for women on television. Shows, even those nearly exclusively focused on the workplace, devoted episodes to new mom characters learning to swim in these challenging waters: sleep-deprived new parents Jim and Pam sneak a snooze in the warehouse in The Office; Mindy Lahiri is forced to hide her baby in a box in the supply closet at work after her childcare arrangements fall through in The Mindy Project; Meredith Grey jumps gleefully on a hotel bed after sneaking away for some much needed personal time in Grey’s Anatomy, and, under the radar, Keri Russell’s conflicted mom/spy character on The Americans, who doesn’t quite fit into the same box.

These glimpses of women forced to juggle work and family were often in sharp juxtaposition to career-driven female characters who chose to remain childless in order to focus exclusively on their work, characters like Shondaland stalwarts Cristina Yang and Olivia Pope. But, recently, something has changed. The powerhouse women on TV choosing to put their career dreams and ambitions first aren’t always childless; they’re mothers, they’re driven, and they’re putting their kids second.

Russell’s character on The Americans, Elizabeth Jennings, is a secret Russian spy forced to play mommy by day as she executed dangerous, deadly missions by night, and has more in common with Grey’s Cristina Yang or Sex And The City’s Samantha. As the story unfolded, viewers got to watch as Elizabeth remained die-hard focused on her job while husband (and fellow spy) Philip (Matthew Rhys) consistently struggled with the pressure and demands of the work, falling into an emotional burnout so often reserved female characters. He is so diminished by the competing demands of home and country that by the beginning of the final season, Philip has mostly given up being a spy, leaving Elizabeth to shoulder the burden of their work, making for a delicious gender role-reversal.

In Elizabeth, television finally features a mother who puts her job before her family; a mother who actually never wanted the husband and the home and was willing to leave it all behind for her mission.

Seen in comparison to Elizabeth, Philip is soft and emotional. He allows his feelings get in the way of things, warning pawns in the traps Elizabeth has set because he doesn’t want to see them harmed, hesitating enough that Elizabeth has to take over necessary kills, and demanding late-night discussions about the children and how they’re being raised. The series penultimate episode climaxes with an emotionally charged conversation between Philip and his FBI-agent best friend, Stan, as Elizabeth stands to the side, waiting for the feels-fest to wrap so they can get on with the necessary work of escaping to Russia.

But it isn’t simply the flipped-script that makes Elizabeth unique. In Elizabeth, television finally features a mother who puts her job before her family; a mother who actually never wanted the husband and the home and was willing to leave it all behind for her mission. For Elizabeth, there is no internal struggle with work/life balance: her work will always come first because her family was created only in service to her mission. She does not feel the pull between her commitment to her job and the task of raising children, showing an interest in child-rearing duties only when she takes daughter Paige under her wing as a fledgling Soviet spy. Though emotionally cold or mission-oriented women like Elizabeth Jennings had appeared on screen before, rarely had they appeared trailing kids behind.

And in the rare occasion they did, the public outcry was fast and shaming. Mad Men’s Betty Draper character was viewed by audiences as an “unhappy killjoy” for her role as a repressed, unsatisfied housewife. And Breaking Bad’s Skyler White character faced such hate from fans for being a strong, non-submissive, morally compromised woman that the real life actress who played her was compelled to write a column in The New York Times on the public’s vitriol for these kinds of TV wives. But for all the hatred these characters received, their saving grace was that they were, for better or worse, mothers.

Which is why it was so satisfying to see The Americans be rewarded at the 2019 Golden Globes for Best Drama. Not only was it finally the recognition the critically acclaimed but chronically overlooked show deserved, but it was also recognition of the possibility that after years of complex, complicated mothers who didn’t conform to archetypal ideas being lambasted by the public, the world may finally be ready for a show that goes all in and features a character who puts her children second without looking back (except for one literal last look at daughter Paige while Elizabeth flees the country).

Perhaps Elizabeth Jennings escaped outcry because she was a Soviet spy merely pretending to be an American mom, existing far outside the realm of reality for most families dealing with daycare drop-offs or middle-school sports schedules. Consider, for instance, the questions posed to Midge Maisel, of The Marvelous Mrs. Maisel. Though the show is a critic’s darling and Rachel Brosnahan was rewarded with a Best Actress in a Comedy or Musical Golden Globe, her character, mother Midge Maisel has faced think-piece scrutiny.

After being left by her husband, and throwing herself into becoming a standup comic, the single-minded intensity with which Midge pursues her dream of comedy stardom received criticism ranging from being called a “terrible mom,” to stamping her depiction of a working mom (“with more narrative emphasis on the ‘working’ part”) as sugary escapism, to calling the childcare-logistic-free universe she inhabits a ‘female empowerment fantasy.’ Mrs. Maisel may not feel the need to dwell on the difficulties of a mothering work/life balance, but our viewing society sure did (as it continues to do).

Some days, my job is the thing in my life that is more intoxicating and fulfilling than stacking blocks or cooking dinner or giving baths.

All this is not to say that television shouldn’t continue to show the have-it-all struggle for mothers. In our current workplace culture, where mothers face a mommy penalty, but fathers get a daddy bonus and where women consistently face the “maternal wall” (the barrier built by discrimination against working mothers) seeing the difficulty of the very real, incredibly frustrating, and often all encompassing work/life balance can help shape beliefs and challenge long-held opinions about gender expectations.

But, it’s also important to show women for whom that struggle isn’t their centralized character trait. Because sometimes, when I’m invested in a work project, I don’t want to leave to pick my daughter up from daycare. Some days, my job is the thing in my life that is more intoxicating and fulfilling than stacking blocks or cooking dinner or giving baths.

Some days, I wish it was just a little more acceptable for mothers to lay down the struggle of work/life balance and having-it-all, put on a wig, and go kill that Nazi-collaborator with ruthless professionalism — and without an ounce of guilt.

More Like This
These Stepmother's Day Instagram Captions Are Straight From The Heart
Stepmom Quotes & Sayings For Every Occasion
Celebrating Your First Mother's Day? These Quotes Say It All
This Mother’s Day, What I Hope For Is Resilience