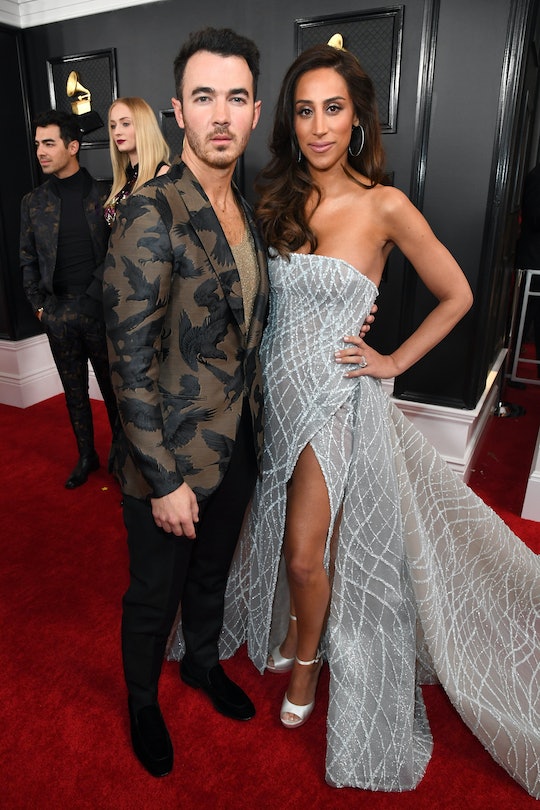 Kevin Jonas Kissed Danielle Mid-Grammys, Is A Wife Guy Through & Through

They are international superstars but they are also Wife Guys, as the Jonas Brothers' regular callouts to their superstar wives prove. At the 2020 Grammys, the rule held: Kevin Jonas kissed Danielle Jonas midway through his performance, surprising her and reminding the world why the band makes monogamy look so good. Nominated for a Grammy and also performing at the big event, the Jonas Brothers dominated the stage, but also made sure to show a little love to the ladies in their lives.

All three of the Jonas Brothers had their wives — also known as the J Sisters — in tow on Sunday evening. And while performing their latest hit single "What a Man Gotta Do," the brothers left the stage to pass through the crowd where Danielle Jonas, Sophie Turner, and Priyanka Chopra were sitting. The camera captured Turner and Chopra jamming out to their hubbies' songs, but Danielle inadvertently got in on the performance when her husband swooped in for a smooch before heading back to the stage.

Kevin and Danielle have been married for over a decade now, tying the knot back in 2009 and going on to have two beautiful daughters together. They welcomed their first child, Alena Rose, in February 2014, and their second child, Valentina Angelina, in November 2016. The family has been a happy little unit ever since, through all of the ups and downs of the Jonas Brothers' journey as a band.

Ten years of marriage and two children, but you guys, Kevin couldn't even walk past Danielle without stopping to kiss her right on the mouth. He was overcome by Talk about keeping the love alive.

The Jonas Brothers have gone from being the poster boys for purity, to a symbol of familial love done right, to husbands — and, in one case, a father — in their own rights. From unique and personalized dream weddings to fairytale love stories with the J Sisters, these boys know a thing or two about the love that they spend their days singing about. That kiss though.