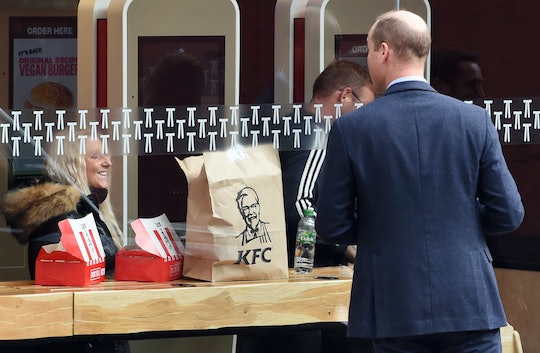 Even future kings can't escape some gentle social media teasing. After a recent royal outing, KFC gave Prince William a new name, or royal title, is so hilariously fitting even the Duke of Cambridge himself could be offended. After all, that's sort of what he gets for looking longingly through the window at a bunch of fried chicken.

Prince William and his wife Kate Middleton were seen on a surprise royal outing on Tuesday in the central London neighborhood of Waterloo. They were there to meet finalists for Middleton's Hold Still photo campaign, which she kicked off with the National Portrait Gallery to encourage people to capture iconic moments during the coronavirus lockdown.

And speaking of iconic photos, one was actually captured during their outing of Prince William, staring into the window of a local KFC to check out what diners were eating for their lunch. Naturally he seemed to delight the people inside. He also delighted the marketing wunderkinds at KFC UK and Ireland, who caught sight of the future king of England appearing to gaze in fascination at the food inside and tweeted an imagined inner monologue: "William whispered quietly to himself; 'Oh, I just can’t wait to be wing.'"

As if that wasn't enough, KFC followed up with this humdinger of a tweet, "I’m sad I didn’t call him His Royal Thighness in the main tweet tbh."

Perhaps because 2020 has brought us precious few small moments of joy, social media users were delighted by this exchange, not to mention just the concept of Prince William peeking into a fast food window with longing. As one person noted, "Hahaha!!! Can you imagine the reaction of the person sitting on the other side of this window?? You happen to look up right into the eyes of none other than Prince William. (What I wouldn't give to be that person!)"

Prince William might not have indulged in some chicken friend with the Colonel's 11 secret spices, but make no mistake — he is a fan of fast food. In 2018, he admitted he was a fan of casual fast food chain Nando's, also well known for their fried chicken, according to The Daily Mail.

While the father of three might indulge in a bit of fast food now and again, Middleton is reportedly a very healthy eater who focuses on green smoothies and salads in her daily diet, as The Daily Express reported.

Perhaps that's why "His Royal Thighness" is looking at KFC with such longing — it's probably not on the menu at Kensington Palace. But when he is king... who knows?