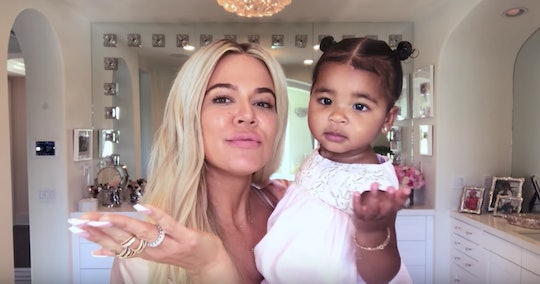 Have you ever wondered what, say, a typical morning for Khloé Kardashian looks like? Or, perhaps, how a quick errand to the store with her daughter in tow works for the reality star? Well, although many details are still unconfirmed, it's very possible that topics like those will be explored in a new show featuring Khloé Kardashian and her daughter True.

During a new episode of Keeping Up With The Kardashians, Kardashian revealed that a new reality project featuring herself and True is apparently in the works. In the episode, she met with producers and her mom, Kris Jenner, and said they were "in talks with about helping finalize the show." The camera then pans to a photo of Kardashian and her daughter with the words "Khloé and True Take The World" written on it.

During their meeting, the producers mentioned the show would be filmed "at the house" and follow the duo "out and about," showing "little snippets" of their life together. One of the producers said the episodes would be only a few minutes long and that they'd want to "put it on the internet as soon as possible."

Hopefully "as soon as possible" is, well, really soon. I mean, who wouldn't want to watch Kardashian and her adorable daughter, I don't know, bake bread together?

It's unclear at the moment when and where these episode might air. Additionally, it was never mentioned if the show was actually finalized during their meeting, so fans will have to keep their eyes and ears open for updates. It is possible, however, that fans will have to wait until the Season 17 finale of KUWTK to see if this spin-off ever comes to fruition.

While certainly exciting, news of a potential mother-daughter we series is not entirely surprising. After all, Kardashian has starred in a number spin-offs with her siblings since KUWTK first aired, like Kourtney & Khloé Take Miami, Kourtney & Khloé Take The Hamptons, and Kourtney & Kim Take New York. That was long before she welcomed her daughter, whom she shares with her ex-boyfriend Tristan Thompson, though, so the subject matter would certainly be a bit different this time around.

She's already conquered Miami, the Hamptons, and New York, so it's only fitting that she conquers the world with True in her next project.