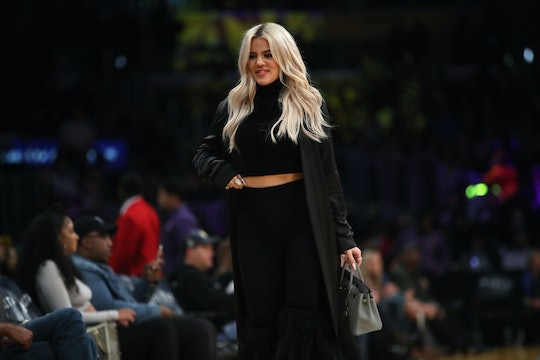 Khloe Kardashian Is Getting Mom Shamed For Her Nails (Again)

Do you know what I like about the Kardashians? They stick to their brand whether people like it or not. And I have to tell you, there are a lot of people who have made a real meal out of not liking anything about the Kardashians. Mom-shamers in particular, who appear to have a whole lot of time to lecture other parents on the internet, considering they market themselves as parenting experts and such. What are people mad at the Kardashians about this week? Well, Khloé Kardashian got mom-shamed for her nails. And it's not even the first time this has happened in 2019.

As most people are well aware, Khloé is mom to 10-month-old daughter True Thompson. If you follow Khloé on social media, you probably know exactly what her adorable daughter looks like because she is absolutely the star of her mom's Instagram and Snapchat accounts. Say what you like about the Good American designer, but she is clearly totally in love with her daughter. And yet there are people out there who want to call her out as some kind of irresponsible mom, despite all evidence to the contrary and also despite it not being anyone's business. Why? All because she has long fingernails.

Khloé has always been especially fond of long nails, and the long red nails she shared on Instagram on Saturday were really nothing out of the ordinary for the new mom. She once admitted on an episode of Keeping Up With The Kardashians that long nails give her "energy," and a new mom with a busy baby needs all the help she can get right?

Apparently not. It seems strangers on the internet have concerns over her ability to change True's diapers with those long nails (or seemingly care for her at all), worried they might somehow scratch her and injure her, as Allure reported. Critics took to the Revenge Body host's Instagram account to let her know how they felt about her nails that are none of their business.

How do you pick up or change True's diapers with those daggers???

How do you change a diaper with those nails???

To long 😳 not good when you have a small child

This isn't the first time critics have called Khloé out for her preference for long nails, as CafeMom noted. On Jan. 7 the mom shared a selfie featuring her long nails, and everyone was all bothered by that picture as well. They wondered how it would be possible to take care of her little girl at all with the serious impediments of fingernails. I mean, do they think she'll forget they're attached to her hands and go full Wolverine on her baby or something? Because this seems incredibly unlikely to me.

Of course, the critics have done nothing to change Khloé's habits and she continues to live life on her own terms, nails and all. And I think it's important to note that True continues to grow and thrive, even though her mother has long nails.