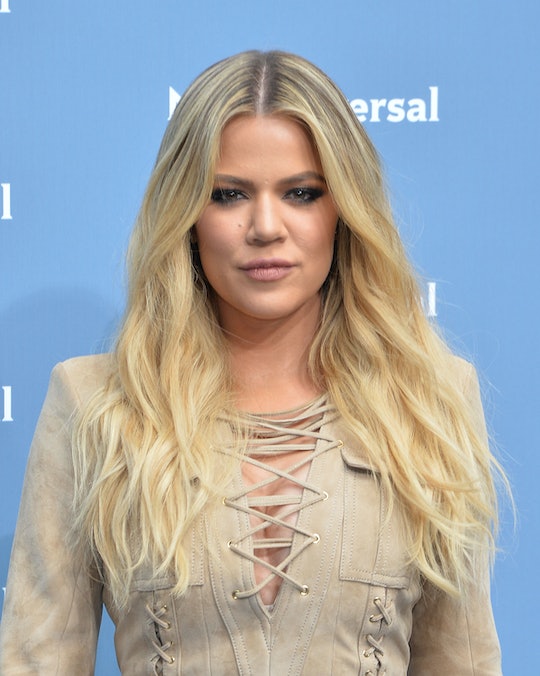 As much as the world would like to generalize about the Kardashian family, real fans know that they are nuanced and complicated women, just like the rest of us. The most surprising thing to new fans might be that their most striking family characteristic is not that they were born knowing how to contour their cheek bones — it's that they know how to keep it real. If you need convincing, please allow me to direct you to Khloe Kardashian's tweets about her pregnancy cravings, which are, for lack of a better phrase, so basic.

In a good way, of course. It's easy to assume that celebrities like the Kardashians are other worldly and somehow subsist on kale and avocado smoothies alone, for fun. But even the healthiest among us can't get through a pregnancy (or a day) without craving a little something extra.

It's not just Khloé's tweeting about her strong desire for a stack of pancakes that has me swooning, though. Since the beginning of Keeping Up With The Kardashians, Khloé has taken the most heat for her looks and every single pound she's gained or lost has been headline worthy, for no good reason. She's struggled publicly with loving herself, so when she tweets with abandon about wanting spaghetti with a side of strawberries, it just makes me smile knowing that she's totally comfortable with herself and has finally found a way to block out the haters.

Sisters That Snack Together...

Fans were quick to commiserate with Khloé about her random desire for carbs and a binge session with her sister. One person commented that when she was pregnant, she ate six ice cream sandwiches a day. In the midst of her cravings tweet storm, Khloé responded, "Oh my god now I want a f*cking ice cream sandwich." Same, girl, same.

It's ridiculous that a woman tweeting about eating food is somehow a radical act of resistance, but here we are. And it is! Especially for Khloé Kardashian, creator of the Revenge Body. As problematic as some may think that concept is (and it is), it's not easy to grow up in this world as a woman and not pick up some body dysmorphia along the way.

The Kardashian and Jenner women all grew up on national television, which means that they were an easy target for body shaming trolls. It's easy to write off their obsessions with huge salads and fitness as shallow, but it's just not that simple. Did they ever really have a choice? If the Kardashians are obsessed with how they look, it's only because us viewers demanded that they always look a certain way. It's refreshing to watch Khloé work this all out on social media, to be honest.

Khloé's always said that it was hard to grow up around her sisters and in the spotlight. She told Entertainment Tonight, "I was so insecure. And my sisters have had the most beautiful skin their entire lives, like, not even a pore. I was like, "How the f**k am I the chubby one?"

Having lived most of her adult life in the tabloids and around sisters who do pretty much everything they can to hide their imperfections, it's refreshing to see Khloé just bare it all on social media. Last month, she tweeted about her ever changing "pregnancy body" and cellulite, which her sister Kim considers to be the actual worst thing that can happen to someone's body. "I now have cellulite on my legs! Cute! Cute! 'Pregnancy may make cellulite look worse for a while, because the weight that you gain in pregnancy could make it more noticeable,'" she tweeted.

Yes, gaining weight, drooling for some late night carbs, and accepting our cellulite is something all of us do, all the time. It's just nice to see Khloé Kardashian doing it too these days.