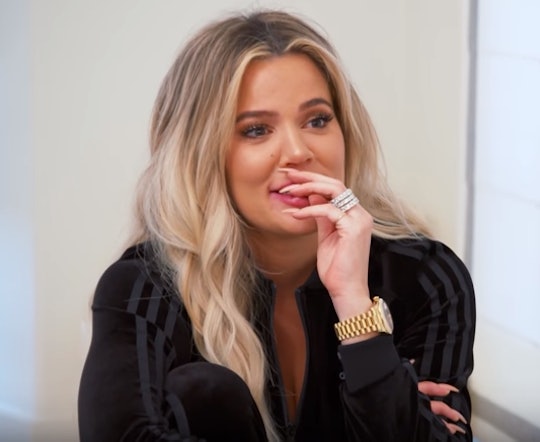 Cue The Awws, Because Baby True Thompson Just Had Her First Swim Lesson With Her Mom & Dad

Khloé Kardashian strikes me as one of those new moms who is just relishing every single milestone with her baby girl. Whether little True Thompson, who is just 4 months old and already super adorable, is smiling or sitting up or meeting a puppy, her mom is all over that action. So it should come as a surprise to exactly no one that the new mom was giddy about her baby's most recent milestone. Khloé and True had a swim lesson together with baby True's dad, Tristan Thompson, and it looked like an absolute blast.

A few weeks back, the Good American designer was starting to think about whether or not she should start teaching her baby girl how to swim. Although just to be clear here, the American Academy of Pediatrics recommends that children wait until age 4 to learn how to swim. When babies take swim lessons, it is generally just a way for parents to get their babies accustomed to being in the water and spend time with them, according to Very Well Family. It's a nice way to encourage kids to enjoy the water and to feel safe in it, even though children should never be left unattended by the water.

Last month Khloé was already starting to think about getting True into some swimming lessons, and she asked her followers for some advice on the subject.

Khloé tweeted to her followers:

At what age should a baby take swim lessons? I see so many tiny babies learning to swim now. Personally, I think that’s very smart. Thoughts?

Of course her fans were happy to help, offering stories of their own swim lessons with their little ones and what worked for them.

It looks like she made her decision regarding swim lessons for her baby girl. She shared a picture of herself with True in the pool, smiling and clearly having the time of her life, on her website. The Revenge Body host included the caption:

True had her first mommy and daddy swim class. It was really special and we learned a bunch of tips swimming with her. She loves the water!

True loves the water so much, apparently, that she's even down for being dunked under water. According to People, her mom wrote on her app:

She’s also getting used to dunking under the water, which she enjoys. After each dunk, she sticks her tongue out and just smiles from ear to ear! She lovesss the water!

Thompson was apparently there as well, which means baby True had plenty of people watching to make sure she was was safe. And can we just talk about her little bathing suit for a minute? I mean, I know it's not important or anything but it's really cute.

The swim lessons came at a great time, considering the whole Kardashian family spent a little holiday time together in Mexico over the Labor Day weekend, according to Cosmopolitan. Not that the new parents are expecting their baby girl to hit the water on her own any time soon, obviously. But it's just nice to know that your baby likes being in the water when you're on holiday with them, you know? It means you can float around with them and keep them cool under the hot sun. And since True Thompson is a Kardashian baby, you know she's going to have a million amazing little bathing suits.