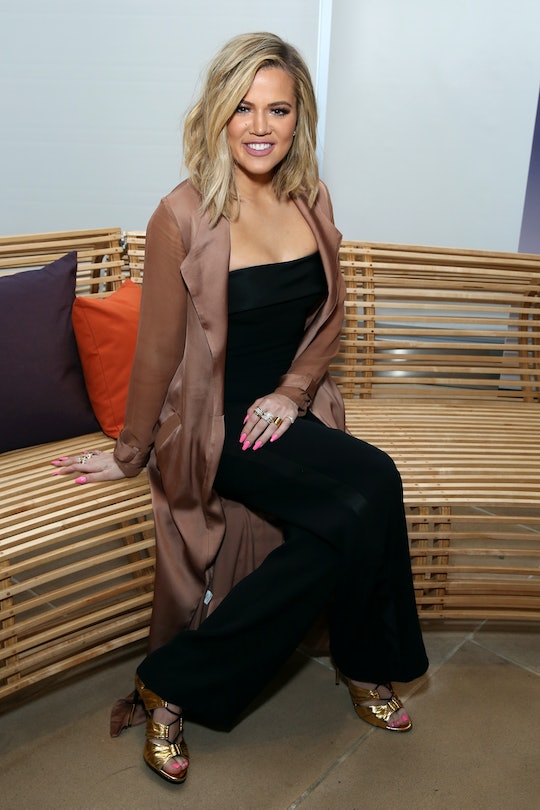 Guys. We're only a few months into 2018 and with three confirmed Kardashian babies, we're calling this the year of the Kardashians. Khloé Kardashian (our favorite Aunt Koko), is the latest Kardashian-Jenner sister to join the ranks of motherhood. She reportedly gave birth to a baby girl on April 12 in Cleveland, according to TMZ, where she shares a home with basketball player, and baby daddy, Tristan Thompson. It's been only a few days since the news broke and we finally have the first photo (and name reveal) from the newly-minted mama. (Is it just me, or does every minute when you're waiting a for Kardashian-related memo to drop feel like eternity?)

To say that the last few moments leading up to Khloé's delivery was rocky would be an understatement. Hopefully all was physically fine for the health and well-being of Khloe and her baby, but we can only imagine how emotionally disturbed she must have been, as allegations of Thompson cheating on her (just days before she delivered) broke on the internet. SMH. Romper reached out to both Kardashian and Thompson's teams for comment about the allegations and has yet to hear back.

So while fans waited with bated breath anticipating the baby's arrival, we all collectively cheered when the good news was finally announced that her long-awaited daughter was born. But that joy quickly turned back to frustration and disappointed towards her "partner" whose job is to support, protect, and uplift his partner. You had one job, Tristan. One job.

And you know what? We can now do just that.

In this photo, Khloé shares a very pink room for her new little daughter, who she and Thompson named True. While this isn't a picture of Khloé and her daughter, it is still quite revealing. Koko caption the photo:

Many fans are quick to notice that Khloé gave her daughter True the last name of her father. This decision is being criticized by some fans who are assuming the allegations against Thompson are true, and that he did allegedly cheat on Khloé. Many fans were hoping Khloé would give her daughter the last name of Kardashian, but that clearly didn't happen.

When someone takes a photo and shares it on their social media feeds, paired with their caption of choice, it's safe to assume that it reflects the state of mind that they are currently in at that particular moment (or at least what one wants us to believe that they are in). But we forget that it just captures a millisecond of experience and emotion. So whatever Khloe had posted, whether it were a professional pic of herself in neglige, a casual selfie shot, or shot of Tristan holding their baby girl, the reality is, her situation is complicated.

Some might argue that the Kardashians signed up for this. They want us to be a part of their lives. Everything is a publicity stunt. You know what? Perhaps there is some truth to those questions, that's the "price you pay" when you're a reality starlet, right? Wrong. We should never forget that they are also people, and allowed to be as complicated, determined, lazy, tired, energetic, funny, upset, and excited as the rest of us are at some point during their lives (or within the last 10 minutes).

If there is one takeaway from this photo, it's proof that Khloe is human. Even while there are towers crumbling around her, there are still strong pillars keeping her up (looking at you, Kris). Khloe is going to have good days and bad, joyous moments and painful ones (sometimes within the same second), she'll feel strong and then week, that she can't go on and that she can conquer anything. And you know what? she has every right to feel everything whenever she wants.