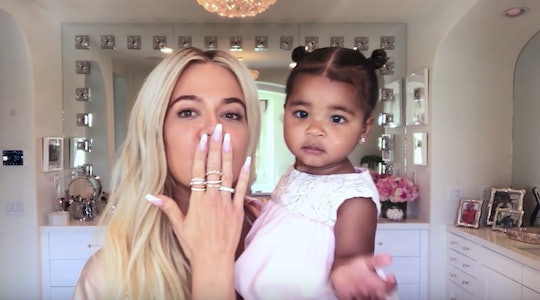 Khloé Kardashian and her 1-year-old daughter, True Thompson, always seem to have so much fun together. There is never a dull moment in the lives of the mother-daughter duo, whether they're playing or going on vacation together. In fact, the two just went to the beach together this weekend. And Khloé Kardashian's new photos with her "beach baby" are so adorable, they'll give anyone some serious vacation envy.

Since it's back-to-school season, many people are busy preparing for the fall and 2019-2020 school year. But Kardashian and her daughter are not even in that mindset quite yet. In two new Instagram posts shred Sunday, Aug. 18, for instance, Kardashian revealed that she and her daughter are in full-on vacation mode at the moment. And it doesn't sound like the two want to leave any time soon, at least evidenced by Kardashian's Instagram caption. "This summer I have been focused on ME," Kardashian wrote in the caption of a solo shot. "Me from within. Mind. Body. Soul. #focused #peace #strength."

But Kardashian has also been focused on her super adorable daughter, too. In another Instagram post shared to her account, Kardashian shared that she and True have had the time of their lives this summer. In the photos taken on the beach, Kardashian and True can be seen wearing light blue bathing suits (the same color as the sky and the water) as they enjoy their time on the shore. In each one of the photos, they can be seen relaxing, digging in the sand, and soaking up as much time in the sun as possible. "My beach baby and me," Kardashian captioned the photo series.

I don't know about you guys, but I think True seems like such a beach baby. Based on the photos that Kardashian shared of her little girl, it appears as if she can't get enough time in the sand and sun.

Kardashian's followers are not blaming her for continuing to enjoy her summer, especially since she and her daughter look like they're having such an incredible time.

"You two are so beautiful," one commenter wrote.

"After everything you deserve this and so much more," another commenter added.

"So precious!!," another commenter stated. "There's so many of us mamas that draw our strength from our babies and you're blessed with that beautiful lil' princess."

It goes without saying Kardashian definitely recognizes how she lucky she is. This summer, for example, she and True have been having so much fun getting messy and doing as much as they possibly can together. They've definitely been having an exciting summer so far, and it's only bound to get better in the upcoming years as True gets older.

In an interview with Us Weekly earlier this summer, Kardashian said that she has had so much fun watching her daughter grow up and evolve into her own little person. "She dresses way better than I do, and she looks just like her dad, but she acts I think just like me," she said. "She's crazy, basically. She's just silly and she's not shy. How I was a kid is very much how True is."

Judging by Kardashian's Instagram feed, True seems to have such a good time wherever she goes, which makes sense. Although these summer days might be coming to an end within a matter of weeks, it's clear that Kardashian and her "beach baby" are still soaking up as much of it as they possibly can.

More Like This
10 Baby’s First Christmas Outfits Cute Enough To Save For Their Kids
Cry-It-Out: The Popular Sleep Training Method, Explained
The Best Toys For 6-Month-Olds Will Do More Than Just Keep Them Occupied
Here’s What To Do If Your Baby’s Nose Bleeds After Suctioning