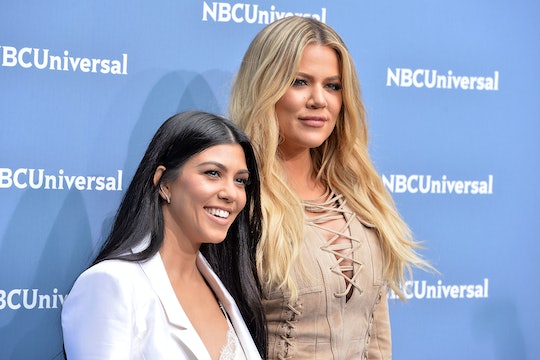 Kourtney Kardashian's daughter Penelope Disick just may be the Kardashian-Jenner family's new resident photographer. The 6-year-old recently had Khloé Kardashian's daughter, True, pose for a photo shoot — and luckily, both Penelope's Polaroids and a few behind-the-scenes shots made it to Instagram. Khloe Kardashian's photos of baby True and Penelope are utterly adorable, and they show how the youngest KarJenner generation (rather, the KarJenner-ation) are already so close with each other.

On Wednesday, Khloé Kardashian shared a carousel of four photos of True and Penelope to Instagram. "These are the moments I’ve been waiting for!!! 😍😍😍 how blessed am I?!?!" Khloé captioned the album. "P is an incredible photographer! And True is a very good baby model lol (she sort of had no choice)."

The first two photos in the carousel show the 4-month-old True posing in what looks like a Bumbo Floor Seat. (According to the item's description on Bed Bath & Beyond's website, the seat lets a baby sit up on their own.) In the pictures, True is posing for Penelope the photographer, who is pointing a Polaroid camera at her baby cousin. The second two photos show the Polaroids that Penelope took, laying on a carpet.

OK, so True's entire head didn't totally make it into every photo. But hey, Penelope is learning. Not to mention, True manages to look super cute in the photos where her face is visible. My favorite is totally the center photo in the last image Khloé posted on Instagram. That SMILE! Those CHEEKS!

Furthermore, the photos reveal a few angles of True's nursery that fans haven't seen yet. The room is not only decorated with tons of pink, but these new photos make it seem like there is some sort of pink, warm light in the room as well. It looks so dang cozy, I think I may need to take a midday nap!

The KarJenner parents have all opened up about how awesome it is that their children have so many cousins around their age. “I think it’s really special to have three little baby girls all at the same time,” Kourtney told People earlier this month, adding that the family calls them “the triplets." "To have all of our kids be able to grow up together and there’s one after the other, I feel like we’re all so blessed," she added, according to People. “We love it — it’s the best energy. We were just hanging out with all the kids outside and it’s really amazing.”

Plus, Khloé has dropped hints that a cousin photo shoot of True, Kylie Jenner’s daughter Stormi, and Kim Kardashian’s daughter Chicago (who were all born this year) was on its way. In June, she told Entertainment Tonight:

We’re so excited. Me and Kylie and Khloe are planning one of those kids’ photo shoots, just like a silly shot that we can have all the girls, ‘cause Stormi and Chicago have so many pictures together. So, we can’t wait for True to join the crew.

And when a fan asked Khloé if photos of the three “triplets” together were ever going to happen, Khloé confirmed that they had finally done the shoot. "We had a cousin photo shoot TODAY!!!! It was the CUTEST 😍😍😍," she responded on Twitter.

Additionally, last month, Khloé revealed that a bunch of the young cousins attend weekly baby class together. She opened up about it in a blog post on her app. She wrote, according to Entertainment Tonight:

Having all of the cousins together is SUCH a blessing and a dream! We have baby class once a week together with all of the kids and it's incredible! … Seeing their strong little personalities bond with each other is the best thing to witness. I can't wait to watch it continue!