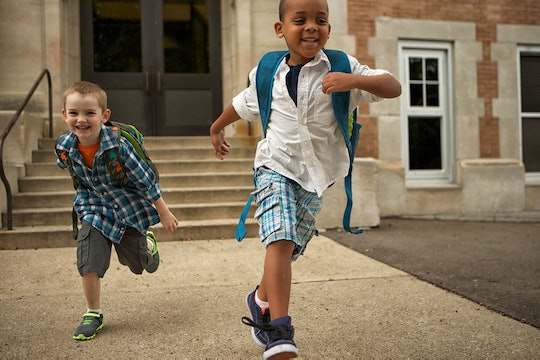 Kids Forget A Lot Over The Summer, But Friendships Don't Have To Fade

The summer slump is a real thing. Over the summer, kids displace a good deal of the practical knowledge they've acquired during the school year. It makes sense, because a lot happens between the time that school lets out in the spring and returns in the fall. Children are incredibly busy all day, bustling from one activity to the other, barely taking time to breathe. But how far does that Summer slump reach into the memory of children? What all do they forget? Equations are one thing, but do kids forget their friendships over the summer?

Memory is a fluid concept, but it's not as unpredictable or unforgiving as you might think. While kids can and do forget formulaic learning and various facts and figures, those are a different sort of memory than the type of connection that forms around a friendship, noted Developmental Psychology. In general, memory is an unstable force, with the ability to be lost or gained with little effort on the part of the person developing the memory, but connections are different than traditional memories, noted the study. The bonds of human interaction and the building of friendships require much more than just rote memorization or the passive acquiring of an autobiographical fact. It is why children who return to the same summer camp or annual class retain friendships for years, even if the children are only able to connect sporadically.

The science is pretty clear that while children might forget silly things like their friend's birthday or their favorite color, they're not going to lose the deeper connections they formed over the course of a year during the course of a 12-week summer break, according to The American Journal of Applied Psychology.

I know I certainly didn't. When I grew up in the '90s, during the summers, there was little my friends and I could do to remain in contact between camps, traveling, and just generally living apart for those months. There was no Fortnite, no Facebook, no group Minecraft and Roblox chats like our children have. And yet, our friendships remained,; they thrived. I don't know a single person my age who didn't completely plan their "back to school" outfit without their friends in mind. (OMG! This Lisa Frank TrapperKeeper is awesome! Jamie is going to die!) I never once questioned whether or not my friends would have forgotten me, because I didn't forget them. The same thing could be said for my summer camp friends. We went a full year between interactions, and yet those weeks in the summer were enough to form lasting bonds that continue to this day.

But, do kids forget their friendships over the summer if they're not reunited with those friends? It's possible, noted Ferris Jabr for Nautilus, but a lot of it will have to do with how old the kids are when they make those friends. Memory scientists have found that memories formed before age 3 and a half tend to completely disappear, and those formed before age 7 tend to fade fairly rapidly. Without repeat exposure, those bonds will likely fall by the wayside.

How many of us remember a preschool best friend if we never saw them again? I can remember bits and pieces of my teachers, and the boy who sat behind me making frog noises, but I don't remember who my friends were, other than a sense of having them. Memories, being the plastic thing that they are, tend to come and go, but the more deeply-rooted connections that are developed and tended for a longer stretch of time aren't going anywhere fast.

This article was originally published on June 17, 2019