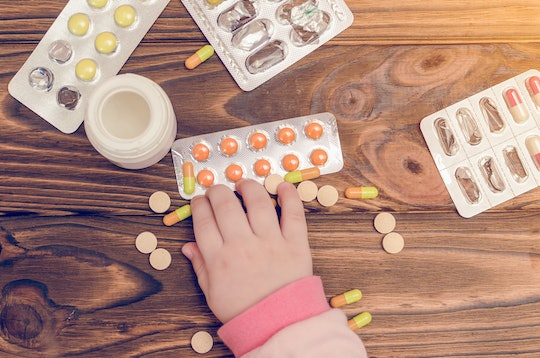 Kids Are Being Exposed To This Drug More Than Ever Before, New Study Finds

If you were looking for more evidence that the opioid crisis is cause for concern, look no further. A recent study found that kids are being exposed to a certain drug used to treat opioid addiction more than ever, which is obviously a serious problem. Especially considering the fact that the drug, buprenorphine, is significantly more dangerous for children than it is for adults.

The study, which was published in the medical journal Pediatrics on Monday, found that 11,600 calls were made to U.S. Poison Control centers between 2007 and 2016 regarding a child's exposure to buprenorphine. More than 86 percent of those calls were made for children under the age of 6 and 89 percent were deemed accidental exposure, presumably because the drug was not stored out of reach of children, according to the study.

Spiller went on to note that some parents might consider buprenorphine less dangerous to children than other opiates, but unfortunately it is quite unsafe for younger children especially. According to KSLTV, Spiller said:

According to a recent article in Live Science, nearly half of the children who were exposed to buprenorphine ended up in the hospital, and 21 percent of them had serious medical issues like cardiac arrest, seizures, respiratory depression, and even comas.

Buprenorphine is prescribed to adult patients struggling to overcome opioid addictions as a way to manage withdrawal symptoms, according to WebMD. While there can be some side effects even for adults, Web MD notes that a "doctor has prescribed this medication because he or she has judged that the benefit to you is greater than the risk of side effects."

When it comes to children, however, the drug does not have any benefits and needs to be stored safely out of reach to prevent unintentional exposure. Even when it comes to older children and teens; Spiller told CNN that adolescents only made up 11 percent of the exposures, but 77 percent of those reported were actually used intentionally. In some cases, teens reported using buprenorphone with another substance like alcohol, the news outlet reported. Teens might not be as susceptible to side effects as small children, but they're still at risk. "It was surprising that adolescents were actually using it for abuse. It's very specific. You have to be in a program to get this. It's carefully managed," Spiller told CNN.

Opioids remain a serious problem in the United States, so it's a positive step in the right direction to read that people are taking medication to try to end the cycle of addiction. But the protection of children by safely storing drugs "up and away and out of sight," according to the Centers for Disease Control and Prevention, needs to be taken more seriously if we want to see these unintentional exposures decrease.