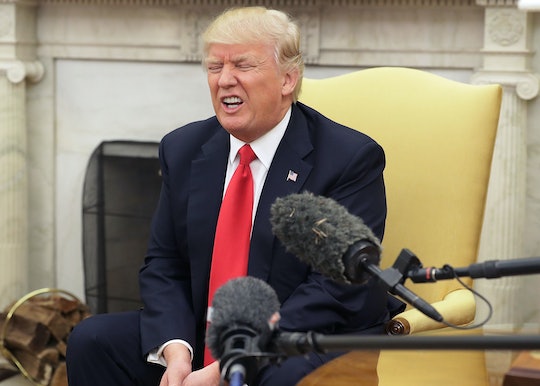 Kids Are Mimicking Trump To Bully Their Peers

It was something so many parents were worried might happen, a potential fallout from a Trump presidency. After President Trump won the 2016 election, despite dozens of instances of bullying, racism, misogyny, and cruelty, concerned parents wondered what that sort of example that might teach their children. What would the trickle-down effect of a Trump presidency, which some people believe has been largely based on categorizing people as either "winners" or "losers," look like for kids in the school yard? Well, it turns out the worst might be happening. Educators are reporting that kids are mimicking Trump and bullying others, because his unfortunate, brutish behavior is often the easy way out. Especially when you're a kid.

According to a comprehensive report by BuzzFeed News, more than 50 reported cases of school bullying across 26 states have included Trump's name or some of his popular catchphrases from kindergarten through 12th grade. The reported instances of bullying included disturbing examples of the sort of behavior President Trump's administration seems to encourage, like one white student in an eighth grade class in California who allegedly told a black student:

Now that Trump won, you're going to have to go back to Africa, where you belong.

Other instances included one Latina student in third grade being chased through her classroom as the other student chanted, "Build the wall!" (in reference to the border wall Trump's administration has vowed to build between Mexico and the United States). In Minnesota, three teenage boys wearing Donald Trump t-shirts surrounded a black student and changed the words of "The Star Spangled Banner" to:

The land of the free, and the home of the slaves.

Educators are struggling to deal with this new level of seemingly acceptable hate speech that has reportedly sprung up in the months since President Trump was elected.

Assistant school superintendent Antonio Lopez of Portland, Oregon told BuzzFeed that he intends to create a plan to track incidences of hate speech and racist rhetoric in his district. "It's unacceptable and it reflects a wider climate of hate that we're seeing," he said.

President Trump has a dark history of using his position of power to bully, using his particularly itchy Twitter finger to mock anyone who might disagree with him. Whether it's actress Meryl Streep or an opposing politician, he has made it clear no one is safe. And unfortunately for children who are far more aware of what is going on in the world than any generation before them, he never appears to suffer any consequences for his actions.

Obviously school yard bullies existed before the dawn of Trump, but educators have found it more difficult to take students to task when the president so openly mocks anyone he doesn't like.

This is my 21st year in education and I’ve never seen a situation like this before. It’s a delicate tightrope to walk. It’s not my role to tell people how to think about political policies, but it is my role to make sure every kid feels safe at the school.

Kids of all ages are sponges. They are part of a bigger world that can often be frightening and overwhelming. So when the actual President of the United States consistently takes the low road, what does that teach kids?