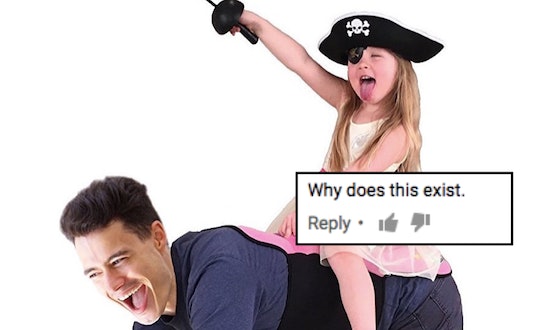 I won't lie to you guys, I *might* have crawled around on all fours on more than one occasion with a kid on my back. I'm not proud of it, but honestly there were some days when I would have done just about anything they asked to keep the peace. So I get the concept of this new toy that allows kids to ride on their parents with a "daddy saddle." But, I'm just not sure how I feel about it, and neither do a lot of other parents out there.

The product has already won several accolades; having initially been created over a year ago, it was named Gift of the Year by The Today Show for 2016. And it has since scored an impressive 4-star rating on Amazon, where it retails for $35 and comes in colors like Sassy Leopard and Princess Pink, which means that there are clearly several parents out there who love it.

Pony Up Daddy saddles also earned the National Parenting Center Seal of Approval, according to the product's website. Because, while it might seem like a bit of a creepy idea, some parents told the company their kids actually really loved it, according to the site:

Testers liked that it is designed to provide a little seat for the child with a handle for them to hold onto instead of holding onto the back of a shirt and stretching it out (we can hear you nodding in experiential acknowledgment as you read this). Parents told us that they were pleasantly surprised at how secure the saddle was, even with a toddler throwing their weight back and forth.

So it certainly sounds as though it's well made... but there are some people out there who have their doubts about the Pony Up Daddy saddles.

Other Had *A Lot* Of Questions

One viewer on YouTube wrote, "I need to know who's idea this was." Meanwhile another simply commented: "UHHHHHHHH" and one more asked, "Why does this exist.﻿"

It does seem a little strange, to encourage kids to toss a saddle on their parents' backs and go for pony rides. And the name alone is enough to get cynical eyebrows raising to their hairlines. But, let's get real here; many parents out there are already giving pony rides. And worrying that their toddler might slide off of their back, or rip their shirt, or whatever. So maybe this isn't the worst idea in the world?

According to several Amazon reviews, the Pony Up Daddy saddles are proving to be pretty popular with their kids. "Not As Bad As It Sounds," one buyer commented.

One reviewer admitted she bought it for her son-in-law to use with his kids. "My son-in-law wasn't amused but once he got over the 'what in the world' shock it was a blast!" she wrote on Amazon. "He said it actually makes it more fun for the kids and easier on him to play pony rides! I recommend this 100%!"

Another reviewer noted that it might be fun, but a "strong back" is needed:

After seeing commercials for this and with no ideas for my husband for Christmas, I got this for him. We have a three-year-old. And she found it very entertaining. Unfortunately mom and dad are not in their 20s or early 30s so we can't cart her around a ton. My husband does have to wear kneepads on our hard wood floors. But a cute idea.

So if you have a child over the age of 2 who likes a good pony ride around the living room, a strong back, and a willingness to gulp back your dignity to make a kid laugh, it seems the Pony Up Daddy saddles might work for you.

But seriously; get ready to swallow that pride guys.