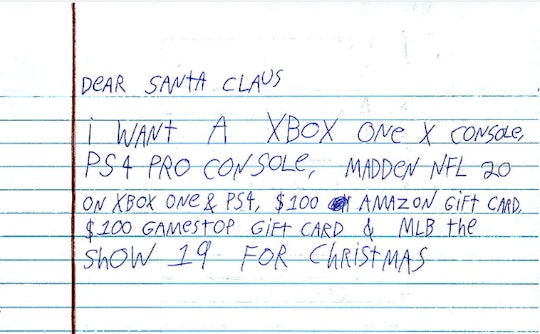 Kids In Need Want iPhones & Nintendos From Santa. That Doesn't Make Them Greedy.

The letters to Santa from the teens are always the ones that hit me in the guts. A Nintendo Switch. An iPhone. “Maybe AirPods” — this from a 14-year-old who first listed a $25 gift card to download music, then a little money to "buy his mom a bouquet of roses.” The AirPods were tacked on almost as if he was afraid to ask for them.

I found his letter, and dozens like it, while pouring through some of the ones that show up on the web every year via non-profits who turn to the goodness of strangers to help give kids a merry Christmas. They’re letters from kids across the country, kids whose families are down on their luck at the moment and could use a little help.

Those letters are getting more attention this year thanks to the United States Postal Service Operation Santa program, a new online version of the USPS’ long-standing efforts to answer the hundreds of thousands of requests that pour into its offices around the country.

Renewed attention hopefully means more kids are seeing their wishes granted. But it also means we’re treated to the annual dose of self-righteous “philanthropists” who say they want to give kids a little something but only after making it wildly clear that they think these kids are a bunch of greedy gusses.

“Damn, these kids are ballsy!” I saw one mom post on social media after reading some of the items on the Operation Santa wish list.

The overarching theme of comments I’ve seen in the past few days? Low income kids should just dream smaller...

“Where are the LEGOs?” demanded another, after listing out the priciest items she’d found on kids’ lists and assuring her pals she wouldn’t even spend that much on her own kids.

The overarching theme of comments I’ve seen in the past few days? Low income kids should just dream smaller, because they’re going to be disappointed when Santa doesn’t show up with everything their hearts desired.

Have we forgotten that they’re just kids?

I confess I don’t have the extra funds to buy someone else’s child an iPhone this year. But I also have to confess that my child, who prefers to go by they, has one that that they use every single day — not just for chatting with friends but to communicate with me, as a calculator, as a viewing device, as a means to look up information for school, and on and on.

I never asked my child to dream smaller.

I never assumed they were greedy for wanting what has become an almost necessary device for today’s teens in a world devoid of payphones, home phones, and cable TV packages. I ran the numbers and realized it was a wise investment. I realized they’d use the device day after day for years to come – something I only wish could have been said for all those “hot toys” of holidays past that dropped to the bottom of the toy chest before the last pine needle had been vacuumed away.

It’s not their fault that their families just can’t make it happen this year.

I’d like to say I could do the same for someone else’s kids, but I can’t stretch my budget enough to encompass more expensive gadgets. Instead I’ve asked a few friends to pool our money together this year so we can buy a few big ticket items off of a few teenagers’ wishlists. With their money and mine, I’ll be hitting the mall to make some gadget-fueled dreams come true.

What I won’t be doing is looking down on any young person for sharing a wish; for daring to believe they deserve the same kind of holiday magic they see bestowed on other kids.

My personal financial limitations are not these kids’ fault.

It’s not their fault either that they are not as privileged as those of us who peruse the Santa letters each year, looking for someone whose child we can help, secure in our knowledge that our own kids’ holiday dreams will be fulfilled.

It’s not their fault that technology has gotten increasingly expensive, and parents can no longer grab a cassette tape off the sale rack at Sam Goody and call it a day. Even the good, clean, wholesome fun of blasting the latest hit song and dancing around your bedroom with a buddy requires a pricey device these days.

It’s not their fault that their families just can’t make it happen this year.

The folks at T. Rowe Price estimate parents spend an average of $422 per child on holiday gifts, and a third of parents spend $500 or more per kid. It’s true that many of those parents — an estimated 56 percent — will go into debt to do that. It’s true too that many others, parents like me, will spend less and tell their kids that some things on their lists were just too far out of their reach.

I already had to tell my daughter that the tickets to a concert that they asked for this year are just not doable. They said they understood, and they’re revising their list.

But I’m glad they were able to dream big.

Every kid deserves to dream.