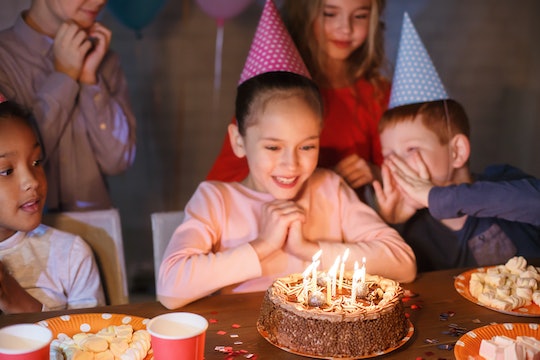 As early as your child's first birthday, you will likely find yourself prompting them to make a wish as they blow out their birthday candles — but are you wasting your breath? As it turns out, kids learn to make wishes at a certain age, according to experts, but once they are able to is when the real fun begins. Toddler development is a trip, right?

Do you remember throwing pennies in fountains as a kid? I used to dig change out of my grandmother's purse and hold them in my tiny clenched fist before tossing them into a huge fountain at our local mall and making as many wishes as I had coins. I mainly remember wishing for new toys I had spotted while out shopping or for an ice cream cone at the food court, which makes perfect sense for an elementary school-aged kid.

My wishes were simple, but nonetheless I understood the concept of wish-making, which according to Dr. Michael Mintz, a clinical psychologist at Children's National Hospital, doesn't happen for most kids until a certain age. "Starting around age 3 or 4, children begin to understand the concept of a wish. At that age, the concept may not make complete sense to them (though, let us be honest, making a wish is not really a rational concept), but they can grasp the idea that they can wish for something and hope that it happens," Mintz tells Romper. All of that development leads to some real magical thoughts.

The reason that the early preschool age is the time when kids begin to understand what making a wish means has to do with their brain development. "At age 4, a child's logic (left brain — think reasoning) comes online, and most can begin to make the connection between cause (a wish) and effect (it coming true)," Maureen Healy, author of The Emotionally Healthy Child and parenting coach at Growinghappykids.com, tells Romper.

Healy also explains that wish-making can be a powerful part of the childhood experience. "Many children are magical thinkers, which happens before the age of 8 years old. That is why movies, animated shows, and fairytales — even modern ones — are so important to children. They are real," Healy says. "The idea of a wish is also very active in movies from Cinderella to Moana, so connecting with that idea that anything is possible is very positive for children."

Although wishes can be magical and positively influence children, every child experiences wish-making in a different way, according to Healy. "I don't believe there is a typical way to describe how a 'normal' child understands wishes at a young age — every boy and girl is different," Healy says.

Despite the positive power of making wishes, Mintz explains that it can be confusing for youngsters when they first begin making wishes, although it does get better as time goes on. "Preschool-aged children may have some difficulty tolerating the fact that, even if they want something, they might not be able to have it," Mintz says, citing children assuming their parents control things they often do not as an example.

"Similarly, when considering a wish, a child might get upset when that wish does not come true. When reality does not align smoothly with their desire, they may express anger at a parent or blame them," Mintz says. "As they get older, children develop the capacity to differentiate between things that are in their parents' control and those that are not. As we all know, children will be confronted with many instances in which they are tasked with accepting that not everything turns out as they hope it might. Indeed, it is an important lesson for children (and adults)."

With the understanding that wishes can be powerful in the mind of a child, yet also a cause for some confusion for young children, Mintz offers this advice for parents of preschoolers: "Parents can make use of simple language to explain the concept of the wish (i.e., ‘a wish is something that we hope will happen, that we hope will come true…but it might not.’). It may be helpful to use a story from a book or a movie to help them understand what a wish is."

Maureen Healy, author of The Emotionally Healthy Child and parenting coach at Growinghappykids.com